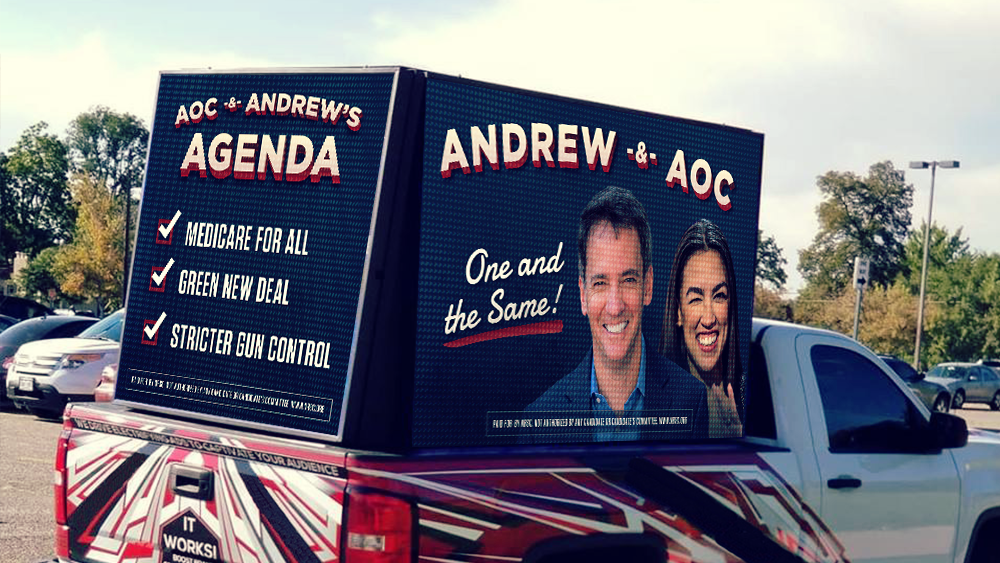 A press release from those clever kids at the National Republican Senatorial Committee (NRSC):

Tomorrow, the National Republican Senatorial Committee (NRSC) is launching a mobile billboard and Facebook video ad around the University of Colorado Boulder campus featuring Democratic Senate primary candidate Andrew Romanoff and Alexandra Ocasio-Cortez (AOC) as “one and the same.”

“From the Green New Deal to Medicare for All to stricter gun control, Andrew Romanoff and Alexandra Ocasio-Cortez are one and the same,” said NRSC spokesperson Joanna Rodriguez. “Colorado deserves an independent, bipartisan voice, not someone who is just going to be a vote for ‘The Squad’s’ radical far-left agenda.”

If you look at the mobile billboard the NRSC deployed to the streets of Boulder during this weekend’s fundraiser for Boulder County Democrats starring Rep. Alexandria Ocasio Cortez, you should be able to notice something right away: in Boulder, this isn’t a negative billboard. It’s more of a backhanded love letter.

For some months now, the NRSC has been rolling out ads ostensibly targeting minor Democratic primary candidates with the real intent of boosting their profile versus much better-known contenders. In the same vein, this billboard from the NRSC is obviously intended to boost Andrew Romanoff in his underdog primary bid against Gov. John Hickenlooper–who outpolls Romanoff on the order of 60% to single digits, and is the endorsed candidate of the Democratic Senatorial Campaign Committee (DSCC).

We of course know there are residual hard feelings among certain Democrats over Hickenlooper’s late-ish entry into the U.S. Senate race, and that the simple arithmetic underscoring Hickenlooper’s strength against Sen. Cory Gardner compared to the rest of the Democratic primary field is not a popular discussion subject in some circles. Democrats will pick their nominee. Republicans want to pick their opponent.

And everyone is looking at the same arithmetic.

Sometimes, and this is one of those times, the messenger says more than the message.