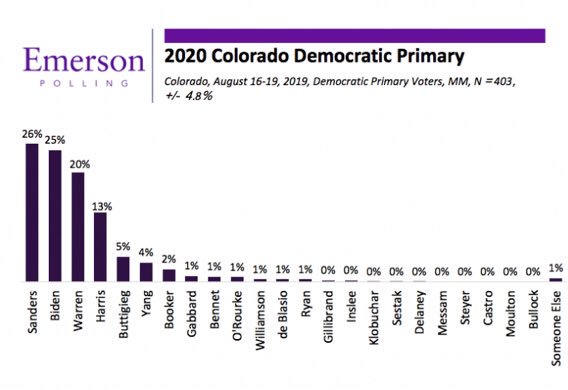 Among the Democratic candidates, U.S. Sen. Bernie Sanders, who won Colorado’s 2016 caucus, leads with 26% support, according to the Emerson College poll released Tuesday. Former Vice President Joe Biden comes in a very close second with 25%, and U.S. Sen. Elizabeth Warren is third with 20%. The margin of error is 4.8%.

Colorado’s own U.S. Sen. Michael Bennet — who has suggested Sanders and his more progressive ideas couldn’t win in Colorado — received just 1% support in the poll.

Comparing these in-state numbers to a nationwide April poll also conducted by Emerson, we see that Joe Biden’s support has remained static at 24-25% while frontrunner Bernie Sanders has sagged three points. The bulk of the momentum between these polls appears to be solid growth of support for Elizabeth Warren, who shot up from 7% nationally in April to third place behind Biden and Sanders with 20% today in Colorado.

The survey also found former Colorado Gov. John Hickenlooper leading U.S. Sen. Cory Gardner, the Yuma Republican up for re-election, 53-40 in a hypothetical match. Hickenlooper, who dropped his bid for president last week, has yet to announce whether he’ll mount a Senate bid.

It’s interesting to us, but not unexpected, that in a survey showing such strength for two progressive candidates, Sanders and Warren, also shows former Gov. John Hickenlooper with a powerful advantage over incumbent GOP Sen. Cory Gardner. Hickenlooper’s ill-fated presidential campaign was heavily focused on attacking Sanders and “socialism,” after all, and this poll shows Sen. Michael Bennet’s presidential campaign with little traction even here in his home state. This could be an indicator that Colorado Democrats are more lucid of the different dynamics governing the national versus our local political landscape than they’re given credit for.

One thing’s for sure: as a Super Tuesday state, we won’t be hurting for polls to show the trends as they firm up.