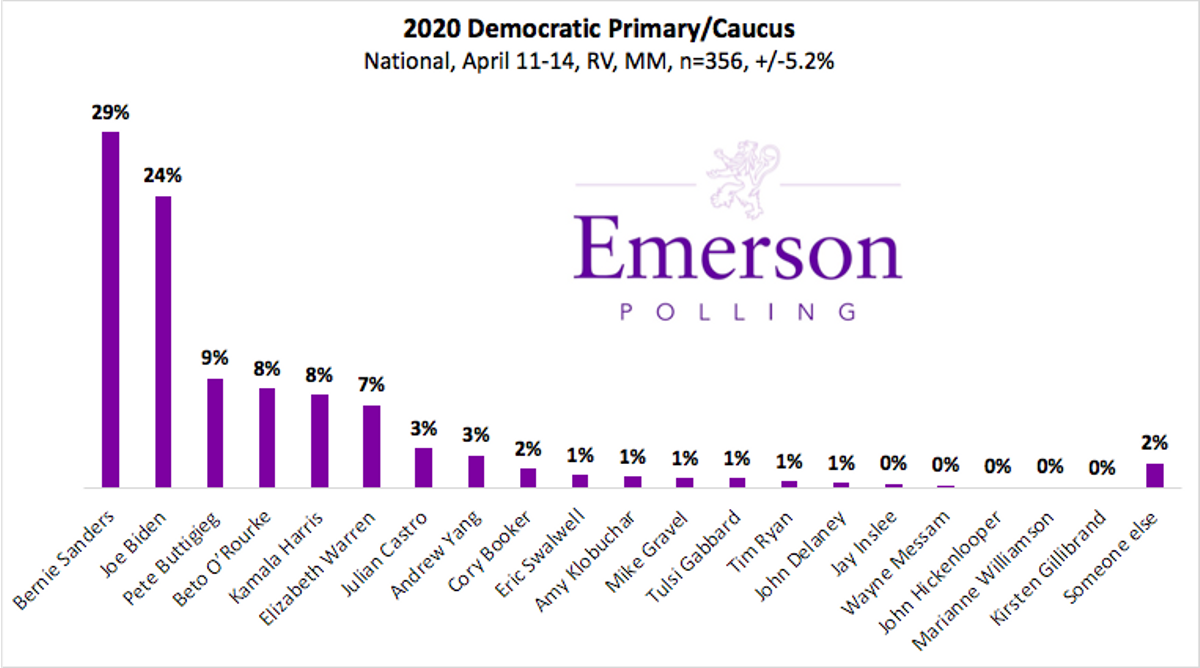 Emerson College, given a favorable rating for their polling in 2016 by FiveThirtyEight, is out with a new poll of the Democratic presidential primary that supplies interesting if not yet very reliable data points:

A new national Emerson poll, including 20 Democratic candidates for President, found Senator Bernie Sanders ahead of the pack with 29%, followed by former Vice President Joe Biden at 24%. They were followed by Mayor Pete Buttigieg at 9%, former Rep. Beto O’Rourke and Senator Kamala Harris at 8%, and Senator Elizabeth Warren at 7%. Entrepreneur Andrew Yang and former HUD secretary Julian Castro were at 3%. The poll was conducted April 11-14 of Democratic Primary voters with a subset of n=356, +/- 5.2%.

Spencer Kimball, Director of Emerson Polling, said “while still early in the nominating process, it looks like Mayor Pete is the candidate capturing voters’ imagination; the numbers had him at 0% in mid-February, 3% in March and now at 9% in April.”

Sagging numbers for Joe Biden are consistent with bad press he’s received in recent week over his “handsy” demeanor with women–although there’s an argument that Biden’s oblivious response to the backlash has been worse than the actual offenses. Seeing Bernie Sanders pulling away in this poll is something we can’t place confidence in until we see it corroborated, but Sanders’ superior name ID and loyal grassroots following are giving him undeniable early strength. We continue to be fascinated by the attention being given to South Bend, Indiana Mayor Pete Buttigieg, but the sustainability of his upstart campaign is a question only time can answer.

As for basically everybody else in this enormous pack of candidates, including Colorado’s so-far only official hat in the proverbial ring? Nowhere to go but up is what the optimists would say.