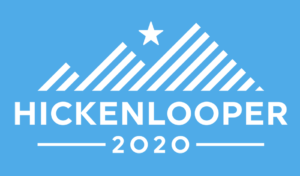 All signs were pointing to this week as the moment when former Colorado Gov. John Hickenlooper would formally enter the race for the Democratic Presidential nomination. Today is the day, as CNN reports:

He made the announcement in a video titled “Standing Tall,” which tracks Hickenlooper’s life from laid-off geologist, to owner of a brew pub, to mayor of Denver and to governor, and touts the Democrat’s experience in a variety of fields as a key reason he should be the person to take on President Donald Trump in 2020. Hickenlooper casts the President as a “bully” in the more than two-minute video.

“I’m running for president because we’re facing a crisis that threatens everything we stand for,” Hickenlooper says in the video as images of Trump play. “As a skinny kid with coke bottle glasses and a funny last name, I’ve stood up to my fair share of bullies.”

He adds: “I’m running for president because we need dreamers in Washington but we also need to get things done. I’ve proven again and again I can bring people together to produce the progressive change Washington has failed to deliver.”

Hickenlooper is the 14th candidate to formally announce a bid for the Democratic Presidential nomination in 2020. Here’s the kickoff Hickenvideo: