Get More Smarter on Friday (July 26)

It’s been a long, strange week in the land of politics — particularly if your name is Ken Buck — so let’s wrap things up. It’s time to “Get More Smarter.” If you think we missed something important, please include the link in the comments below (here’s a good example). If you are more of a visual learner, check out The Get More Smarter Show.

► It would seem to be inarguable that Russia (and perhaps others) interfered in the 2016 election, and it seems likely that they are going to try again in 2020. As CBS News reports, Senate Majority Leader Mitch McConnell is actively working to make sure that nobody in the United States is effectively able to prevent future interference:

In blocking the legislation crafted by Senate Democrats to provide more funding for election security, McConnell declared the effort partisan and insisted the Trump administration has already done much to secure the nation’s elections.

One bill McConnell objected to would have both required the use of paper ballots and provided funding for the Election Assistance Commission. He also objected to legislation that would have required campaigns and candidates to report offers offers of election-related aid from foreign governments.

As Paul Waldman writes for the Washington Post, McConnell’s rationale for cutting off election security funding is essentially that Republican candidates benefit from his inaction:

Republicans have quite plainly looked at our current state of electoral dysfunction and concluded that it’s working pretty darn well for them. Donald Trump is president, isn’t he? Why would we want to mess with a system that’s producing such wonderful outcomes?

► We’ve spent a lot of time in this space recently discussing the various grifting operations taking place across Colorado — including at least one example of a recall effort convincing poor saps to part with a piece of their Social Security checks. As Politico reports, the conservative ScamPAC business is humming these days:

After recruiting thousands of donors for the American Conservative Union — the powerful organization behind the annual CPAC conference — a Republican political operative pushed the same contributors to give millions to a PAC that promised to go after then-President Barack Obama, but then steered much of their donations to himself and his partners.

The PAC, called the Conservative Majority Fund, has raised nearly $10 million since mid-2012 and continues to solicit funds to this day, primarily from thousands of steadfast contributors to conservative causes, many of them senior citizens. But it has made just $48,400 in political contributions to candidates and committees. Public records indicate its main beneficiaries are the operative Kelley Rogers, who has a history of disputes over allegedly unethical fundraising, and one of the largest conservative fundraising companies, InfoCision Management Corp., which charged millions of dollars in fundraising fees.

The saga of how politically connected fundraisers used one of the nation’s leading conservative organizations as a springboard for fundraising that mainly benefited the fundraisers themselves sheds light on the growing problem of so-called scam PACs — organizations that take advantage of loosened campaign finance laws to reap windfalls for insiders while directing only a small portion of receipts to actual political advocacy.

If only you could still make a fortune by pretending to raise money for the purposes of attacking Hillary Clinton. Those were the days, eh, Ted Harvey?

► Westword’s Chase Woodruff explains how Republicans like Sen. Cory Gardner and Rep. Scott Tipton are actually trying to scuttle public lands legislation by introducing a new bill of their own. We waded into this topic earlier this week.

.@RepKenBuck, who got Mueller to say Trump could be charged after leaving office, said on @630khow Denver radio last night that Mueller “misunderstood” his question. pic.twitter.com/duKnPYnTNH

Meanwhile, freshman Rep. Joe Neguse (D-Lafayette) showed Buck how to get the answers you actually want during a Congressional testimony.

► Conservative operative tries to get college professor to shit on TABOR, instead gets real response that contradicts his own arguments.

► Local officials in the Aspen, Colorado area can’t get any information about who hosted a private fundraiser for Vice President Mike Pence earlier this week. As the Aspen Times reports, local taxpayers are getting screwed as a result:

Every person who’s hosted a politician or candidate for office in Aspen for a non-public event since the ’90s has reimbursed local law enforcement agencies for overtime security costs, Pitkin County Sheriff Joe DiSalvo said Wednesday.

However, that precedent appears to be in jeopardy following Vice President Mike Pence’s appearance Monday at a private, $35,000-a-couple fundraiser in downtown Aspen, the sheriff said.

“I can’t get anyone (involved in the fundraiser) to even talk to me about (reimbursement),” DiSalvo said Wednesday.

And while DiSalvo hasn’t expressly been told he won’t be reimbursed, it appears taxpayers from up and down the Roaring Fork Valley will likely cover the $24,562 bill for Pence’s visit, which involved law enforcement personnel from Pitkin County, Aspen, Snowmass Village, Basalt, Carbondale and Garfield County, he said.

► So, uh, now what? As the Washington Post reports, Democrats are trying to figure out their next steps after former special counsel Robert Mueller’s Congressional testimony on Wednesday.

► As Sandra Fish writes for the Colorado Sun, Sen. Cory Gardner (R-Yuma) is gluing together decent fundraising quarters thanks to a complicated network of friendly committees and campaign transfers:

Gardner is banding together with Republican colleagues to raise big money for his 2020 reelection contest — expected to be among the most competitive and expensive in the nation — in a way that some say allows candidates to sidestep campaign finance limits. [Pols emphasis]

To raise the cash, at least one of his committees stopped through Ritz-Carlton hotels and Disney Resorts, and bought branded campaign gear.

In addition to his official campaign account, Gardner is currently a participant in 10 joint fundraising committees, including five added just this month. That’s the second highest number for a senator facing reelection in 2020.

Joint fundraising committees connected to Gardner raised at least $8.7 million since 2015, according to a Colorado Sun analysis. Of that total, $1 million went to Gardner’s official Senate campaign account. And other beneficiaries of the fundraisers may turn around and donate money to Gardner’s Senate campaign or spend it to support his reelection.

► Colorado Secretary of State Jena Griswold really, really wants to run for the Democratic U.S. Senate nomination. It appears that there are a lot of people who really, really would rather she did not.

► More polling shows that tying yourself to President Trump in 2020 is akin to wearing cement shoes.

► State Senate President Leroy Garcia was “Governor for a day” this week because of travel schedules for Gov. Jared Polis and Lt. Gov. Dianne Primavera.

► An official portrait of President Trump will soon adorn the walls inside the State Capitol. Nothing will top this photo, however.

► “We have some very, very bad people in government that would be willing to do very bad things and for bad reasons,” says President Trump, with no sense of irony.

► The bajillion Democrat candidates for President will debate once more next week, so CNN examines where the candidates and their campaigns stand heading into the last week of July.

► The Washington Post catches up with the man who created that brilliant fake Presidential seal that flanked President Trump at an event earlier this week: 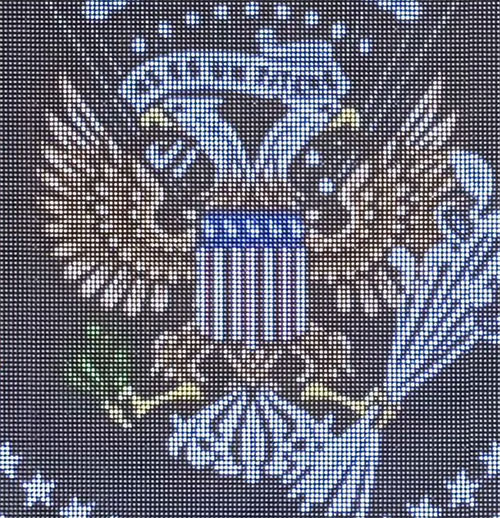 Hints of Russia and golf clubs

If #coleg had turned around and passed Proposition 112 after voters rejected it, your GOP friend’s point would make sense. Was your friend saying the legislature has to avoid all bills on any broad topic associated with failed ballot measures?

► This headline from the publication formerly known as the Colorado Statesman does the heavy lifting:

The Denver Post has more on this nonsense idea that has become all the rage among Republican elected officials desperate to pretend that they are accomplishing something.