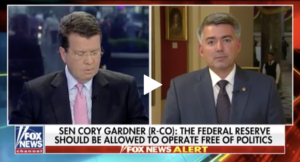 Colorado Sen. Cory Gardner (R-Yuma) says a lot of words when he is asked a direct question about a specific topic. As we’ve noted in this space on numerous occasions, it is rare that those words form together into any sort of actual answer that might make an inkling of sense to an English-speaking human being. If you were to ask Gardner to name his favorite color, for example, you might get a long description of a meal that he recently ate. If you are a constituent worried about health care, Gardner responds by thanking you for supporting people with disabilities.

Talking to Gardner is like trying to navigate through an automated phone menu when calling your health insurance provider; there are a myriad of possible options to select from, but none of them have anything to do with the real reason you are calling. This nauseating habit of talking in circles has only gotten worse since Donald Trump was elected President and Gardner decided to hitch his political fortunes to that big orange wagon. Gardner is so transparently desperate to avoid earning Trump’s ire that he’s practically hiding under his desk in the Capitol building.

On the rare occasion that Gardner pops his head up, it’s only to remind President Trump that he is glued firmly to his highness’s backside. Last week Gardner was interviewed by Neil Cavuto in a segment on the Fox News show “Your World,” and though only two topics were broached, Gardner dodged them both.

First, after a hard-to-follow patter about Iran and accountability, Cavuto tried to get Gardner — a member of the Senate Foreign Relations Committee — to answer a specific question about foreign relations:

CAVUTO: We know that the Iranians are bragging about building up their uranium to levels that they would essentially be back in the nuclear game. What do we do about that? [Pols emphasis]

GARDNER: If you look at what the Iran nuclear deal was allowing anyway, in just a few months…they would be allowed to do any number of things. Including a release from sanctions…individuals who have perpetrated horrible acts against the United States and others around the globe will be relieved from sanctions – certain sanctions – under the agreement. That’s the agreement as it would be enforced. And so, we know that this wouldn’t have ended their nuclear program. We know that in a decade, or less than a decade, they would have been able to continue unfettered, unchecked with their program. What we need is to have a program that actually stops them. A deal that actually stops them, that Congress can agree to, that our allies can enforce. Because what you were left with the Iran nuclear deal was something that simply wasn’t going to prevent them from continuing the harm that they inflict, not only regionally, but around the globe.

In short, Gardner responded to a question about what to do about Iran’s nuclear ambitions with a long ramble about the problems with President Obama’s Iran nuclear deal, none of which had anything to do with Cavuto’s actual question.

With his remaining time before the commercial break, Cavuto tries gamely to switch topics in hopes of a coherent answer on the topic of Federal Reserve Chairman Jerome Powell, who President Trump has routinely bashed ever since nominating him to the job in 2017. What he gets instead is one of the more nonsensical Gardnerisms that we’ve yet come across:

CAVUTO: If I could switch gears…the Federal Reserve seemed to hint that it could cut rates as soon as next month, presumably because of, you know, the trade situation and potential tariffs, assuming that the China deal isn’t still had (?) The President has apparently been looking at ways, everything from firing Jerome Powell to demoting him. He can’t apparently do either. How do you feel about that relationship? Does it worry you? Do you think the President is right to be dissatisfied with him?

GARDNER: Well, look, I think we need to make sure that we allow our Federal Reserve to operate that is free of politics, free of influence, and I think that’s exactly what Jerome Powell has committed himself to do. I’ve had the opportunity to meet with him prior to his confirmation, I met with him after the confirmation, and we need to make sure that he is allowed to manage the economy in a way that he believes is best free of politics, free of pressure. And I think he’s given me that commitment, and I think that’s exactly what we should expect from our Federal Reserve Chair.

CAVUTO: Should the President lay off?