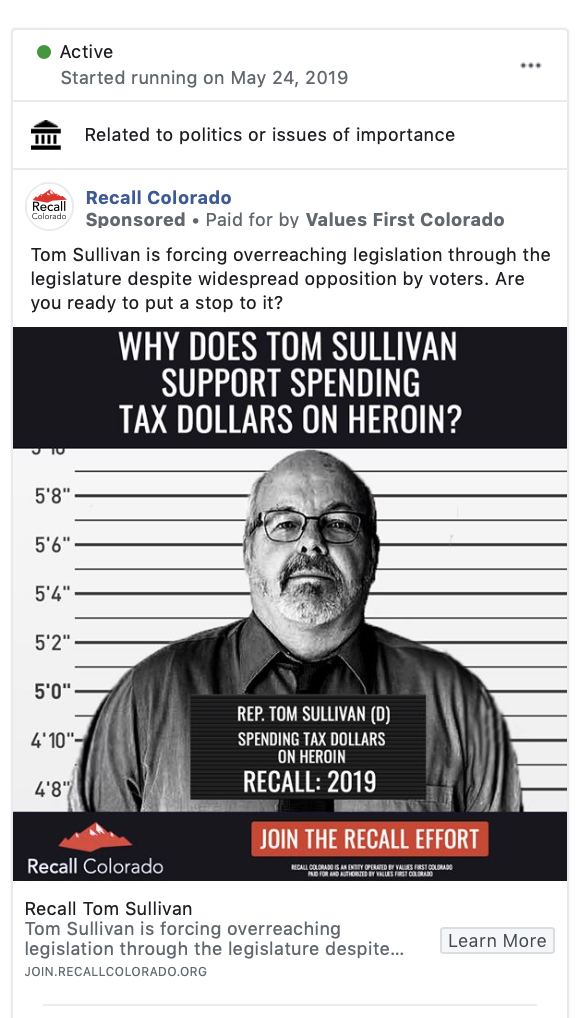 Let’s briefly go over the problems with this ad beyond the distasteful fake mug shot–the allegation that Rep. Tom Sullivan supports “spending tax dollars on heroin” stems from a silly-season amendment proposed to the budget by Rep. Dave Williams as a “gotcha” political gimmick. Although various policies to address the opioid crisis were debated this year, nothing even remotely close to “supporting heroin” was ever even introduced let alone voted on.

In other words, it’s complete bullshit.

But the far more significant development this ad represents is direct spending by the Neville political operation on the Sullivan recall. Although Rocky Mountain Gun Owners headed by longtime single-issue gadfly Dudley Brown has received the majority of the press since the launch of the Sullivan recall two weeks ago, this ad is paid for by House Minority Leader Patrick Neville’s in-house organization. This isn’t an unexpected development, given that Colorado Republican Party vice-chair Kristi Burton Brown who filed the Sullivan recall is also the registered agent for a number of Neville-linked committees.

But this just reinforces a fact that needs restating as many times as necessary until it’s driven home: the Sullivan recall is not just about Rocky Mountain Gun Owners. The Sullivan recall campaign is sanctioned by and operated from the highest levels of the Colorado Republican Party. Kristi Burton Brown’s absurd attempt to distance her actions from her position as vice chair of the Colorado GOP is undermined even further by the GOP House Minority Leader’s political machine directly engaging in the recall against Sullivan.

No more scapegoating Dudley Brown, Republicans with a conscience. You have to own this.