The Republican who lost his seat last year to Democratic state Rep. Tom Sullivan said Tuesday that he does not support efforts to recall Sullivan over the recently passed red-flag bill.

Cole Wist’s remarks came a day after paperwork was filed with the Colorado Secretary of State’s Office that allows Sullivan’s critics to begin collecting signatures. Sullivan, of Centennial, has been a vocal gun control proponent since his son, Alex, died in the Aurora theater shooting.

It is unfortunate but crystal clear. RMGO owns the Colorado Republican Party.

This is truly a remarkable moment in Colorado politics. 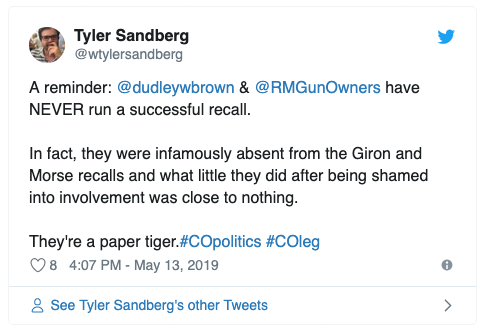 We’re less than 24 hours into the attempted recall of freshman Rep. Tom Sullivan of Centennial by Kristi Burton Brown, the vice-chair of the Colorado Republican Party and longtime ally of the Neville family of politicians and operatives–who are in turn closely linked with the Rocky Mountain Gun Owners, the hard-right single-issue advocacy group with a reputation for bloodying fellow Republicans in pursuit of caucus unity.

But by far most notable about yesterday’s oddly low-key launch is the highly visible and public lack of Republican consensus on initiating this recall attempt–with the substantial wing of the party not aligned with RMGO denouncing the group, the Nevilles, and the hit on Rep. Sullivan. Colorado Public Radio:

“Recalls can identify people, but it also can strengthen elected officials that survive them. The long-term strategy has to be to win November elections,” said Republican political consultant Michael Fields, who heads Colorado Rising Action.

Former GOP chairman Ryan Call said initiating recalls is “a dramatic departure from the historic role and practice of the Republican party in Colorado.” He added that the party historically gets behind recall efforts if there’s malfeasance or if someone in public office is acting in a way that doesn’t align with campaign pledges, which he doesn’t see as the case here.

“We have seen a pretty significant shift in public policy under single-party control of state government, but Democrats are pretty much governing how they promised they would,” [Pols emphasis] Call said. “Voters may have hoped for a more balanced and bipartisan approach, but what we saw during the legislative session is consistent with what most Democratic candidates said they would do while they were running.”

Ernest Luning of the Colorado Springs Gazette confirmed RMGO’s eager involvement in his story today, which anyone with knowledge of Kristi Burton Brown’s ties with the Neville political machine could already have surmised:

“I welcome any group that wants to jump in on it,” Kristi Brown said. “A lot of Colorado parents in my district are upset with Rep. Sullivan and the way he voted.”

The response to yesterday’s news that Rep. Sullivan would be the next Democrat targeted for recall, especially the unenthusiastic response from fellow Republicans, underscores a longstanding divide between the Neville/RMGO axis anchored by Minority Leader Patrick Neville and the rest of the Republican establishment in the state. The recent exposure of highly questionable management of the 2018 House campaigns managed by the Nevilles, which resulted in the smallest GOP House minority in decades, has put the once-formidable political dynasty on the defensive–enough so that they were given a dubious welcome at best when they arrived to “help” with the now-defunct recall campaign against Rochelle Galindo.

But more importantly, going after Tom Sullivan, whose powerful backstory inspires both personal sympathy and support for his agenda of reducing gun violence, is politically hazardous to the point of being totally inexplicable. We’ve talked to a number of smart people on both sides of the aisle, and literally no one can understand why RMGO would start with Rep. Sullivan, kick off the campaign against Sullivan without other targets among which to distribute the backlash–and above all let the news break with no attempt to control the message. To say this is not how you’re supposed to do things is an understatement, and we’re left wondering if they simply didn’t care how it looks to the outside world.

Either way, there is a bipartisan consensus following yesterday’s news that a recall of Rep. Sullivan would be a grave mistake–both objectively for our state’s politics, and politically for Republicans. And that is something we did not expect to see, at least not so quickly and so openly. After years of struggling for dominance within the GOP, the overreach of this recall attempt could represent the beginning of the end for the Nevilles and RMGO.