this week passed the most restrictive abortion law in the country as part of an effort to ultimately force the U.S. Supreme Court to reconsider Roe v. Wade. For obvious reasons, Alabama’s new law has thus been one of the biggest political topics of the week and will likely continue to dominate conversations for months to come. For equally obvious reasons, political reporters have been asking elected officials at all levels of government for comment.

As The Hill newspaper reports, Colorado Sen. Cory Gardner (R-Yuma) doesn’t want to talk about it:

Other Republicans facing tough reelection races in 2020 dodged questions on the Alabama law.

Sen. Cory Gardner (R-Colo.), when approached, said he was late to a meeting and referred questions to his office. Aides to Gardner did not respond to a request for comment. [Pols emphasis]

A United States Senator refusing to answer a question about one of the most significant political questions of the 2020 election cycle is not normal. Senator Susan Collins (R-Maine) is widely considered to be among the most vulnerable Republican incumbents seeking re-election in 2020. Like Gardner, Collins will be running in a state that Democrat Hillary Clinton carried in 2016; unlike Gardner, Collins is actually willing to provide her opinion when asked. Again, from The Hill:

“I’m very much opposed to the Alabama law,” Collins told The Hill. “I think it’s completely inconsistent with Roe v. Wade and will lead to a virtual ban on abortions in Alabama, even for victims of incest and rape.”

“I can’t imagine that any justice could find that to be consistent with the previous precedence,” she told CNN in a separate interview. 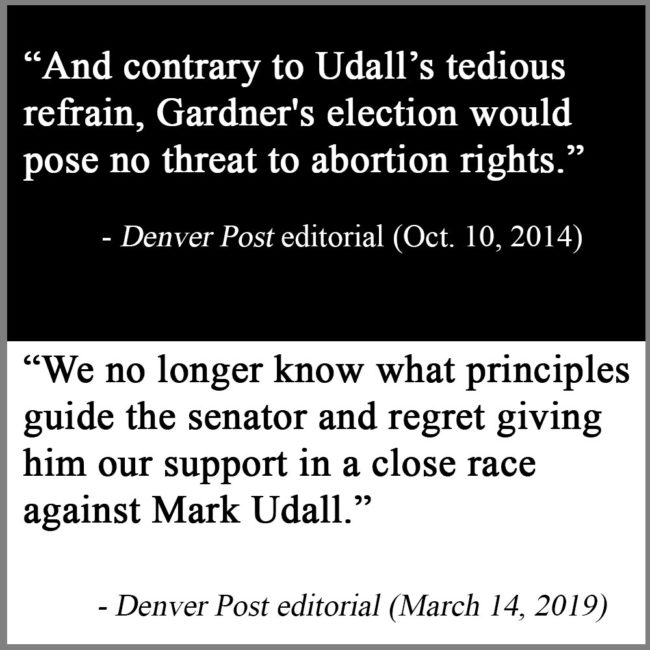 When the Denver Post made its stunning decision in March to un-endorse Gardner in a harsh editorial, it had a lot to do with exactly this kind of behavior from Colorado’s junior Senator. At the time, Gardner had just completed a full 180-degree flip on the subject of President Trump’s “emergency declaration” for border wall funding. None of this is new territory for Gardner — his duplicitous nature has merely become impossible to ignore over the years. This is the same Cory Gardner who told Fox 31’s Eli Stokols prior to the 2014 election that “there is no federal personhood bill,” when, in fact, there absolutely was a federal personhood bill (and Gardner was even a co-sponsor in Congress).

Perhaps the most instructive way to consider Gardner’s non-comment on the Alabama abortion law is to look back at that same Fox 31 News interview from September 2014. Here is how Gardner responded to a question about then-Sen. Mark Udall focusing on Gardner’s ever shifting position on abortion:

“This is a political campaign and he is trying to do everything he can to change the subject, to run away.”

This is Cory Gardner.