Does Cory Gardner Think “Windmills Cause Cancer” Too? 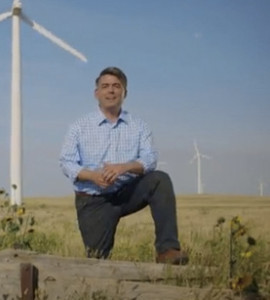 CNN reports on remarks from President Donald Trump at a Washington, D.C. fundraiser for the National Republican Congressional Committee yesterday–in which Trump goes off on a tangent about the horrors of wind power that we have to think would make our allegedly pro-wind power Sen. Cory Gardner blush:

“Hillary wanted to put up wind,” said President Donald Trump at a fundraiser for Republicans in Washington Tuesday, kicking off an extended riff about the evils of windmills — wind turbines, more accurately — and the inadequacy of wind energy. It’s worth looking at in full since it’s clearly becoming part of his stump speech and feeds into his larger distrust of renewable energy and his mocking of climate change…

Among Trump’s false claims yesterday about wind turbines was the baseless assertion that “if you have a windmill anywhere near your house, congratulations, your house just went down 75% in value.” Nobody knows where Trump got that figure, which is 10% higher than he gave in another setting–but it doesn’t matter because neither number has any basis in reality.

From there, it only gets worse:

Trump: “And they say the noise causes cancer. You told me that one, OK.” (Then he made circles with his hands and a noise with his mouth.) “You know the thing makes so…”

It’s not clear who it was who told this to Trump, but there’s no evidence to back it up. There are frustrations with noise from wind turbines and those have led to reports of things like insomnia and dizziness among some people who live near wind turbines. Scientific studies have not identified any human health risk.

And if “noise causes cancer” isn’t enough for you, next came a statement that will come as a big surprise to thousands of Coloradans who work in the wind power industry:

Trump: “No, wind’s not so good and you have no idea how expensive it is to make those things. They’re all made in China and Germany, by the way, just in case you, we don’t make them here, essentially.” [Pols emphasis]

Here in Colorado, four production plants owned by Vestas Wind Systems employ some 3,500 people from Windsor to Pueblo. Not all wind turbines installed in the U.S. are made in the U.S., and parts from across the world go into turbines that are made here–but either way it’s absolute nonsense to claim that turbines don’t provide American jobs.

Of course, the fact that Donald Trump tells lies is not exactly breaking news. The Washington Post released an analysis Monday showing that Trump has made a practically inconceivable 9,451 false claims in the last 800 days. But in the particular case of savaging the wind power industry, there should be someone in the GOP willing to stand up and call Trump out: Cory Gardner of Colorado, who made such a big deal of his support for wind energy on the campaign trail in 2014. Gardner’s recent cozying up to Trump ahead of their mutual bid for re-election in 2020 has included no serious attempt at reconciling Trump’s immoderate words with Gardner’s allegedly more reasonable positions on a wide range of issues, including renewable energy.

With all of this in mind, it’s time to ask the question: does Cory Gardner think wind turbines–in particular the “noise they make”–cause cancer? And if the answer is no, and we assume it is, the next question is this: what would Trump have to lie about to lose Gardner’s support? Trump’s treatment of women wasn’t enough, the North Korean debacle wasn’t enough–not even the national emergency Gardner was certain he opposed before it was ordered.

There must be something Gardner cares about enough stand up to Trump, but this once again isn’t it.