No Fooling: Colorado Republicans Descend Deeper Into the Void 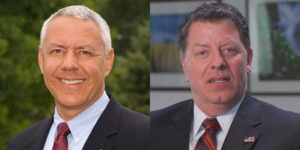 On Saturday, Colorado Republicans selected Rep. Ken Buck to serve as State Party Chairman for the 2020 election cycle. Since Buck is not inclined to give up his day job as a Member of Congress, this means that former GOP Party Chair Steve House will oversee the day-to-day operations of the State Republican Party. This is not an April Fool’s joke.

We’ll get back to House in a moment, but first, a recap: Buck won a narrow victory over State Rep. Susan Beckman on Saturday after four rounds of balloting and a late change from Sherrie Gibson. After failing to generate much interest from Republican voters on the first three ballots, Gibson dropped out of the race for State Chair and endorsed Buck, which was enough to propel the Greeley Congressman to a 51.3% to 47.7% victory over Beckman.

The third top candidate, Sherrie Gibson, the African American former party vice-chairwoman, emphasized the party’s need to diversify, saying the GOP “is not a party of just old men.”

In his acceptance speech on Saturday, Buck voiced strong support for President Trump and spewed out a number of highly-partisan statements. As Senator Cory Gardner (R-Yuma) stood behind him, Buck enthusiastically talked up recall efforts in Colorado; cast the 2020 election as a battle between “freedom-loving Republicans versus socialist, corrupt Democrats”; suggested that Hillary Clinton, and not Donald Trump, “colluded” with Russians in 2016; and was defiant about so-called “red flag” gun safety legislation that has widespread support among Colorado voters.

There are those within the Colorado Republican Party who seem to understand that they should make changes in order to better compete with Democrats in 2020, but as Buck demonstrated on Saturday, right-wing rhetoric and Trump love still rule the day for the State GOP. As Justin Wingerter writes for the Denver Post:

Buck will find himself between a Colorado Republican base that strongly backs Trump and moderate Republicans who are uneasy with the bombastic president. But Saturday’s gathering of party officials was loudly supportive of Trump and bitterly critical of any Republicans who say otherwise.

Yet as Ryan Winger of Republican-aligned polling outfit Magellan Strategies explained in February, this blind loyalty to Trump doesn’t fit well in Colorado:

When Republicans say the problem is our guys weren’t enough like Trump, there’s a complete disconnect there between what they’re thinking and what other voters in Colorado are thinking.

This leads us back to House, who was savaged by Trump supporters in 2016 after the State GOP’s anti-Trump sentiments were laid bare.

Buck’s decision to install House as his right-hand man is a strange move indeed — though not strange enough to deter Republicans with apparently-short memories from going right back to the same well. Republicans seem to have forgotten about how desperate they were to get rid of House ahead of the 2016 election cycle. Efforts to oust House as Party Chairman began literally on the same day that House was elected in 2015 — and several months before the long, strange Coffmangate saga that ultimately turned Colorado Republicans into a national laughingstock.

Consider this 2017 story from John Frank, then of the Denver Post, about House’s decision not to seek another term as Party Chairman:

House served a tumultuous two years as the party’s leader after his historic ouster of the incumbent chairman in 2015 with the backing of the more conservative members of his party.

Months into his term, House faced an unsuccessful coup attempt led by Attorney General Cynthia Coffman that involved accusations of extramarital affairs and threats. And he came under fire in the 2016 election for his perceived bias against Donald Trump, drawing numerous death threats.

Two years later, Republicans are back in the same place — only with significantly more electoral ground to make up after huge Democratic gains in 2018.

Colorado Republicans probably needed to make significant changes in order to be more successful in 2020, but in the end, few in the GOP seemed to be interested in such a move. They’d rather someone like Buck just tell them what he thinks they want to hear.