Get More Smarter on Friday (March 15) 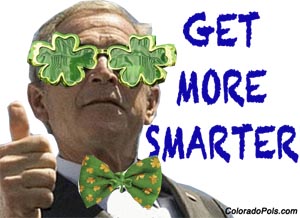 Happy early St. Patrick’s Day. It’s time to “Get More Smarter.” If you think we missed something important, please include the link in the comments below (here’s a good example). If you are more of a visual learner, check out The Get More Smarter Show.

► Colorado Sen. Cory Gardner (R-Yuma) is in a very bad place, politically-speaking, after his inexplicable vote on Thursday to oppose a Senate measure (which passed anyway) condemning President Trump’s “emergency declaration” for wall building money. Gardner’s decision so incensed the Denver Post editorial board that the newspaper essentially retracted its 2014 endorsement of his Senate candidacy: 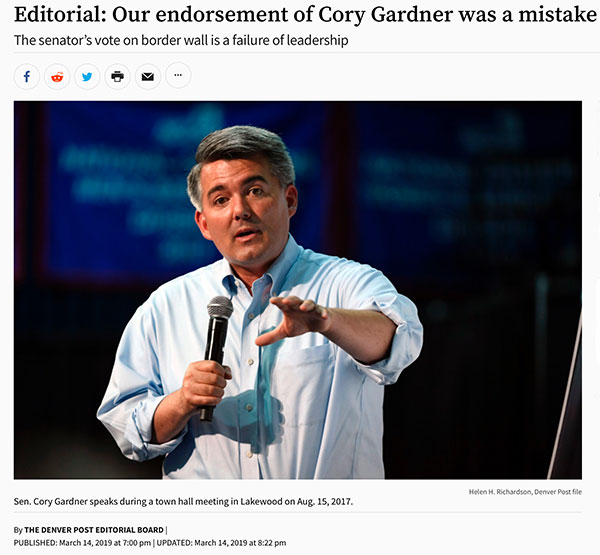 As the New York Times reports, President Trump made a number of calls to Republican Senators in hopes of persuading them to vote “NO” on the resolution. Was Gardner among those who received a personal call? As one Republican donor told Politico, “Beware the fury of Trump.”

► On Wednesday, the House of Representatives overwhelmingly voted on a resolution encouraging the full public release of the final report from special investigator Robert Mueller. Nationwide polling has consistently shown that Americans want to see the full report, and a new Colorado poll echoes that sentiment. From the publication formerly known as the Colorado Statesman:

According to a press release about the poll, 77 percent of voters expect “a full, public report” on the investigation’s findings. The Justice Department, under President Trump, will determine how much of the report is submitted to Congress and, by association, the public.

►  The Joint Budget Committee gets a new look at Colorado’s budget numbers today, which could play a significant role in how the legislature proceeds on one of Gov. Polis’ signature issues of offering free full-day Kindergarten in Colorado.

► As Greg Sargent writes for the Washington Post, President Trump is all sorts of angry after the Senate voted on Thursday to rebuke his “emergency declaration”:

There is probably no better way to demonstrate one’s manly strength and control than firing off a tweet in capital letters. So it is that, when a dozen GOP senators defied President Trump’s orders and voted to terminate his declaration of a national emergency, his powerful Twitter thumbs sprang into action: “VETO!”

The thrilling message to his supporters: Trump’s got this. He’s totally in command of the situation.

But we are now learning new details about just how personally involved Trump was in trying to prevent defections among GOP senators. It turns out Trump aggressively sought to make this vote all about himself — frequently warning that he would unleash the cult-like wrath of his voters if the Senate didn’t do his bidding — and raged as that effort failed.

What makes this so odd is that even though the Senate and House have now voted to terminate Trump’s national emergency, he actually can veto the measure, and his emergency will proceed. So why the histrionics? One possible answer is that, for Trump, even this interim loss represented an unacceptable display of weakness — with ominous portents for the future.

► The Trump administration is finalizing new rules on oil and gas drilling in areas that could negatively impact the weird little bird known as the Sage Grouse.

► The Associated Press reports on a potentially-landmark legal decision in Connecticut:

Gun maker Remington can be sued over how it marketed the Bushmaster rifle used to kill 20 children and six educators at Sandy Hook Elementary School in 2012, a divided Connecticut Supreme Court ruled Thursday.

Justices issued a 4-3 decision that reinstated a wrongful death lawsuit and overturned a lower court ruling that the lawsuit was prohibited by a 2005 federal law that shields gun manufacturers from liability in most cases when their products are used in crimes.

The plaintiffs include a survivor and relatives of nine people killed in the massacre. They argue the AR-15-style rifle used by shooter Adam Lanza is too dangerous for the public and Remington glorified the weapon in marketing it to young people.

► Aides to President Trump are trying to assure the big orange guy that he has nothing to worry about in the looming candidacy of former Vice President Joe Biden. In other words, Team Trump is very worried about Biden.

► The Colorado Independent outlines the swift death in Colorado of a significant measure to  reform immigration policy in the state.

► Colorado lawmakers are considering banning cash bail requirements for petty crimes as part of a what has become a national movement for reform.

► Student activists in Colorado are part of a nationwide movement to increase political pressure for action on Climate Change.

► Right-wing groups in Colorado are still steaming about the failure of the 2018 gubernatorial campaign of Republican Walker Stapleton.

► Former Colorado Gov. John Hickenlooper, now a candidate for President in 2020, opens up about his struggles with prosopagnosia, also known as “face blindness.” From CNN:

Hickenlooper discovered six years ago — well into his first term as governor — that he suffered from face blindness. In what he described as an “aha” moment, the governor was talking to someone and lamenting the fact that he had met someone four times and still couldn’t remember them. When that person said he was possibly face blind, Hickenlooper looked into the condition and determined that was the explanation for why he often struggled as a child with connecting with even close family.

“I had been criticized by my family and my friends for not paying attention, for being distant, not caring about the people I met,” he said. “So, I felt, in a funny way, I felt liberated, validated, that I was who I was.”

Hickenlooper has not been officially diagnosed with the ailment — experts on face blindness say most doctors aren’t able to medically diagnose it — but the former governor has discussed his issues recognizing and remembering faces with a number of face blindness experts who have said he displays clear signs of having the medical condition.

► Senator Cory Gardner (R-Yuma) is an official member of something called the Senate Artificial Intelligence Caucus. We won’t even bother trying to make a joke here.

The president’s advisers suspect that he regularly speaks with world leaders on his phone, according to an official familiar with the inner workings of the White House. “We never know who he’s talking to or what he’s agreed to.” https://t.co/sqnrSLI6Bq

► The Mayor of Fall River, Massachusetts was recalled and re-elected this week. The New York Times explains:

Mayor Jasiel F. Correia II, 27, a Democrat serving his second two-year term, was charged last year with 13 criminal counts of wire fraud and filing false tax returns. He has denied the charges, but the City Council called for him to resign. He refused, setting the gears in motion for Tuesday’s recall election.

On Tuesday, 7,829 residents voted to recall Mr. Correia, and 4,911 voted to keep him in office, according to the city’s Election Commission. But on the same ballot, voters were asked to choose among five people for the mayor’s job. Mr. Correia’s name was included. There, he won a plurality, with about 35 percent of voters voting for Mr. Correia.