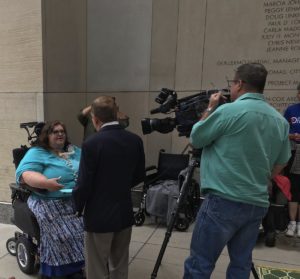 9NEWS reports on the death yesterday of a well-known activist for the rights of people with disabilities in Denver and protecting health care reform in general–Carrie Ann Lucas, who helped lead the June 2017 occupation of Sen. Cory Gardner’s Denver office during the debate over repeal of the Affordable Care Act, helping cement national public opinion against the repeal campaign by putting a human face on repeal’s potential victims:

A Coloradan known for being a relentless advocate for disability rights died on Sunday.

Carrie Ann Lucas was a nationally-recognized attorney who lived with a severe neuromuscular disease. She grew up in Windsor, Colo. and had several careers including being a teacher, ordained minister and legal assistant before becoming an attorney.

Ms. Lucas was an advocate with the disability rights groups ADAPT and Not Dead Yet, speaking, teaching, writing, testifying, and protesting on disability justice and the rights of people with disabilities to healthcare and respect. She was also a talented photographer and cook. Carrie Ann was an activist at heart. She graduated from EMERGE, ran for Windsor City Council in 2017, and was planning on additional political activity. She was chair of Colorado Democrats with Disabilities for the past several years. She was a member of the ADAPT group that protested in Cory Gardner’s office and got arrested to help save the Affordable Care Act in 2017, particularly Medicaid. She served on the Board of Directors of the American Civil Liberties Union of Colorado. She was active with Not Dead Yet and fought hard against physician assisted suicide and the notion that life with a disability is not worth living. She demonstrated every day how amazing life with a disability can be. She was given the Intersectionality Award from The Civil Rights Education and Enforcement Center in 2016. She was a leader in passing HB 18-1104 which changed Colorado law to make sure that disability was no longer a reason to remove a child from a parental home. There is much, much more.

Although Lucas was arrested along with the other ADAPT activists who occupied Sen. Gardner’s office in Denver during the Affordable Care Act repeal debate, arresting officers were unequipped to accommodate her chair and medical technology–which allowed her to wait outside the downtown Denver jail along with the media while the other protesters were kept in custody. The visceral images of protesters in wheelchairs being dragged out of Gardner’s office made nationwide headlines, and contributed significantly to overwhelming public opposition to the repeal of the ACA.

It’s fair to say Gardner’s already poor approval ratings weren’t helped by his handling of the debacle either.

According to social media posts, Lucas’ death may be attributable to an “arbitrary denial” of treatment coverage by her insurer that led to fatal complications. If that’s true and it can be credibly shown that her death was preventable, it’s a tragedy the whole nation should know about.

In the meantime, if you want to honor Carrie Ann Lucas’ legacy, take up her fight.