Bill Coming Due for Gardner on Healthcare #FAIL 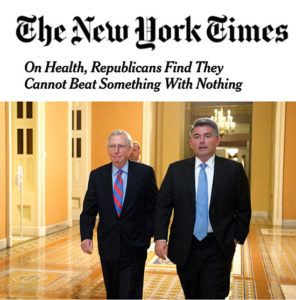 Poll after poll has shown that healthcare was the most dominant political issue of the 2018 election cycle, in which Democrats took majority control of the U.S. House of Representatives and earned sweeping victories across the country — including here in Colorado. Republicans were well aware of this problem ahead of Election Day; they tried unsuccessfully to mitigate the impact last fall with a silly measure intended to show that the GOP really did care about pre-existing conditions.

The Republican healthcare problem is back in the news today with a report from the Washington Post about a recent conversation between House Minority Leader Kevin McCarthy and top GOP donors:

McCarthy’s comments, made in a Feb. 6 conference call from which The Washington Post obtained partial recordings, represent a vindication of Democratic efforts to elevate health care as an issue in last year’s campaign. And in singling out the House Freedom Caucus, the remarks threaten to rekindle internal resentments inside the House Republican Conference…

…Elsewhere on the call, McCarthy offered a selective account of the 2017 health-care battles on Capitol Hill, where Republicans in the House toiled for months to craft an alternative to the Affordable Care Act, narrowly passing a bill in May before watching the Senate abandon the effort three months later.

“When we couldn’t pass the repeal of Obamacare the first way through, an amendment came because the Freedom Caucus wouldn’t vote for” the original House bill, McCarthy said. “That amendment put [the] preexisting condition campaign against us, and so even people who are running for the very first time got attacked on that. And that was the defining issue and the most important issue in the race.”

McCarthy’s frank assessment of how Republicans bungled attempts at changing healthcare policy will be particularly relevant for Sen. Cory Gardner (R-Yuma) as he approaches his re-election campaign. Gardner makes a lot of vacuous statements about healthcare policy as he tries to dance around the fact that he was a reliable vote for every Republican attempt at gutting the Affordable Care Act (ACA) in 2017. He won’t be able to shimmy around these tough questions with his name on the ballot in 2020.

Mark Matthews (then of the Denver Post) foresaw this very scenario for Gardner after Sen. John McCain dramatically sank Republican efforts to dismantle healthcare protections for Americans in July 2017:

…[Gardner] wouldn’t take a concrete position on any of the GOP plans to undo the 2010 health care law — only to back every major Republican proposal last week to come up for a vote, from repeal-and-replace to repeal-and-delay.

On one level, it’s not surprising: Gardner ran for Senate in 2014 on a pledge to dismantle the ACA and, as chair of the National Republican Senatorial Committee, he’s close to Senate Majority Leader Mitch McConnell and tasked with the responsibility of ensuring that his GOP colleagues — most of whom want to unwind the ACA — get re-elected in 2018.

“I am committed to reforming our nation’s broken health care system, and I’ll continue to work to bring relief to Coloradans being hurt by the negative impacts of Obamacare,” Gardner said after the repeal effort collapsed early Friday.

But the way the fight played out — from his own wavering to the Senate’s rushed, overnight vote — leaves Gardner exposed back in Colorado, a swing state with an active conservative base but one where surveys have shown a greater desire to fix the ACA rather than repeal it.

It is, of course, deeply ironic that a politician who rose to prominence because of his opposition to the ACA will struggle to win another term in office…for the exact same reason.