(From Russia with love, Colorado! – Promoted by Colorado Pols) 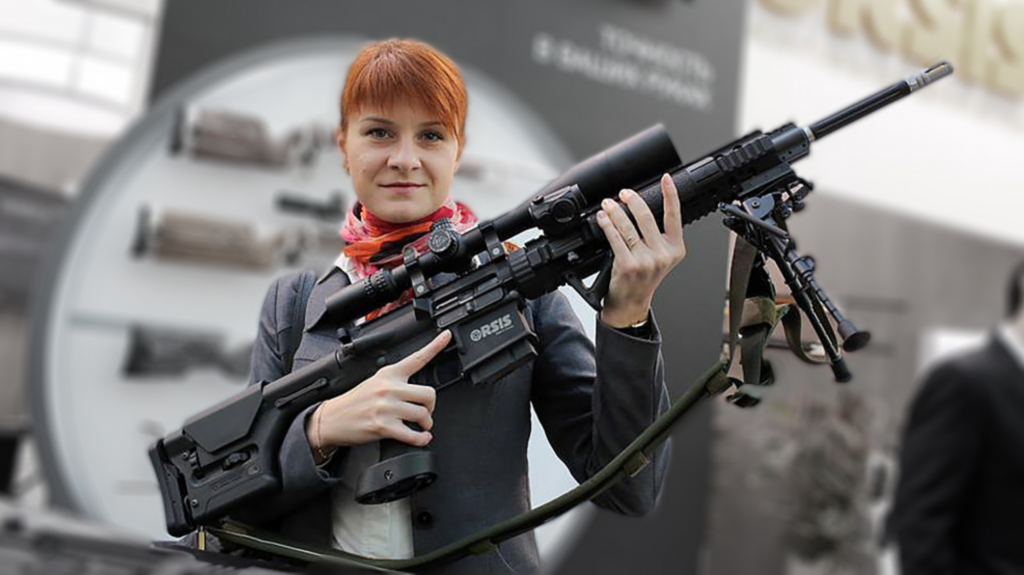 With Butina changing her plea to guilty last week, it’s now official: a Kroenke executive hired a Russian spy to help him pitch a pro-Putin television show starring the Russian President himself.

Jim Liberatore, CEO of Outdoor Sportsman Group (OSG), a division of Kroenke Sports and Entertainment (KSE), met Butina through their shared ties to the National Rifle Association. KSE purchased the Outdoor Channel, with Liberatore at its head, in 2013. He was promoted to CEO of OSG in 2017.

Butina invited Liberatore and his wife to Moscow in 2015 as part of a National Rifle Association delegation she organized along with her Russian handler Alexander Torshin.

Butina’s goal, which has since been detailed by federal prosecutors and in numerous media reports, was establishing a back-channel means of communication to the Trump campaign (and subsequently the administration) via the NRA.

While in Russia, Liberatore and his wife Kim joined other NRA luminaries including former presidents David Keene and Pete Brownell, and former Trump surrogate and NRA favorite Sheriff David Clarke of Milwaukee.

Multiple news reports identified two of the Russian officials meeting with the delegation as Foreign Minister Sergey Lavrov and Deputy Prime Minister Dmitry Rogozin. Sheriff Clarke tweeted about meeting Lavrov, whose position is equivalent to the United States Secretary of State. When asked about the meeting by ABC News, an OSG spokesman said Liberatore “does not recall being at any meeting with Mr. Lavrov.”

The trip clearly inspired Liberatore’s enthusiasm for producing a pro-Putin television show. As reported by ABC News in September,

“…days after their return from Moscow, Liberatore followed up with Butina. He expressed his eagerness to ‘keep the momentum from our trip going’ and sent her a full pitch letter…for a show that would ‘document Mr. Putin’s personal efforts of conservation by producing several one hour programs that would be told through his eyes.’”

Here is the full letter that Liberatore sent the Russian spy, on Outdoor Channel letterhead from the Kroenke offices at the Pepsi Center: 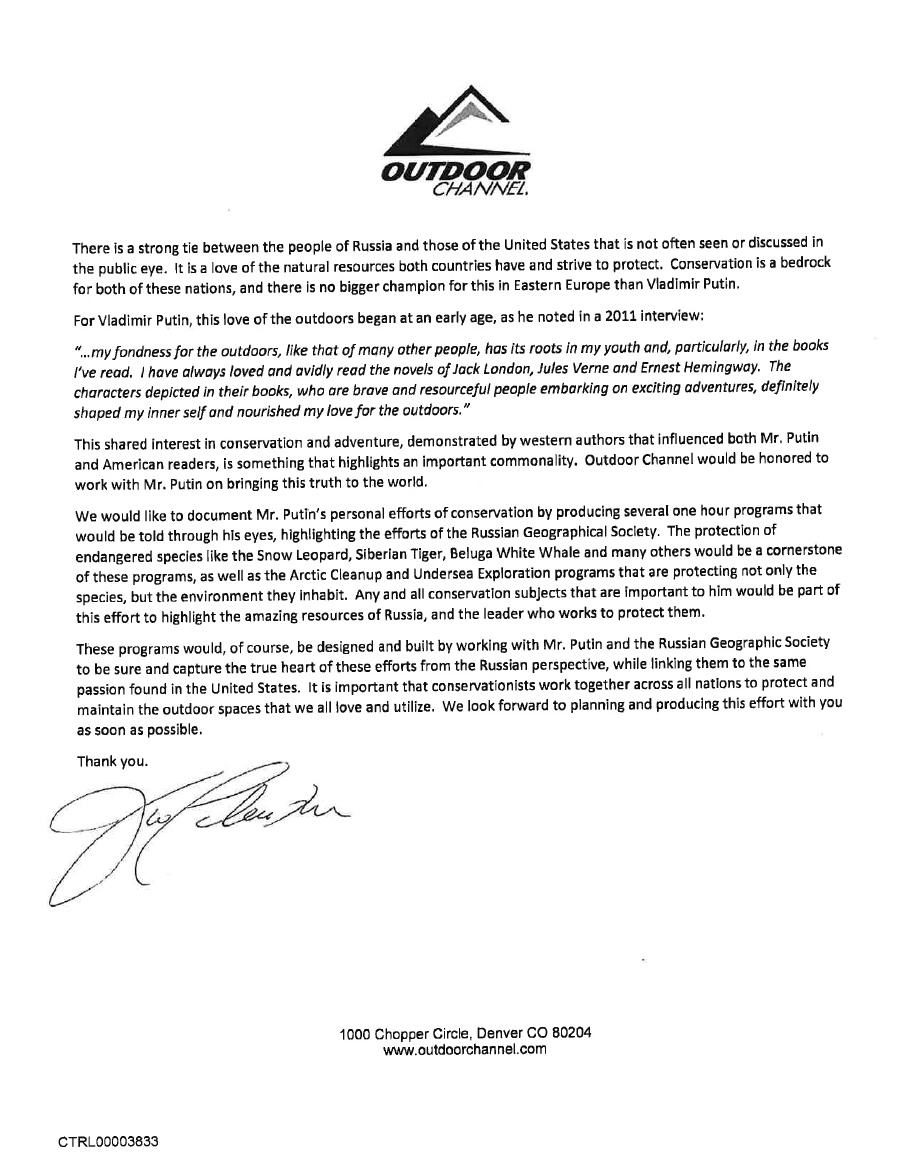 Liberatore subsequently hired Butina to develop the connection to Putin needed to make the show a reality. In response to ABC News inquiries about her work for the company, the Outdoor Channel stated:

Butina was “retained later based on personal representations she made that she could be helpful as an in-country consultant.” She received $20,000 over four months… The company terminated Ms. Butina’s contract after four months because she failed to make progress.”

Butina was paid through “Bridges LLC” a corporation she formed along with her primary contact and lover, GOP operative Paul Erickson, who served as the company’s registered agent. Butina’s attorney has told the FEC that the company was “set up to pay for certain educational expenses of Ms. Butina.”

According to CBS News, Butina’s participation in that masters degree program at American University has been characterized by federal prosecutors as a “cover” for her espionage:

“Prosecutors allege in court documents that attending the university was Butina’s ‘cover’ as she cultivated political contacts and ties with the National Rifle Association.”

Last week Butina pled guilty to one charge of conspiring to act as a foreign agent. She admitted trying to “establish unofficial lines of communication with Americans having power and influence in US politics…[for the] benefit of the Russian Federation.” She also admitted to conspiring “to infiltrate organizations active in U.S. politics in an effort to advance the interests of the Russian Federation.”

“BUTINA entered the United States on an F-1 Student Visa, for the purported purpose of attending university full time in the District of Columbia’ when in truth and in fact, BUTINA continued to act as an agent on behalf of the Russian Federation,” —FBI Affidavit

A status hearing in her case is scheduled for February 12, but in the meantime, she is cooperating with federal prosecutors. As part of her plea deal, Butina has agreed to forfeit “all assets which the proceeds of crimes or are traceable to the proceeds of such crimes.” It is unclear whether the $20,000 Butina received from The Outdoor Channel would be considered the “proceeds of crime.” 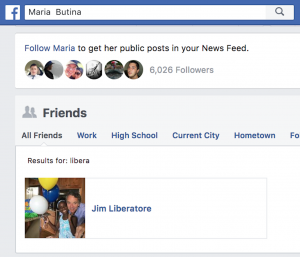 Liberatore’s company is no longer employing Butina, but the CEO himself remains personal friends with her on Facebook. Other Americans who interacted with the Russian agent have been interviewed by the FBI.

An inquiry sent to an OSG press department asking if Liberatore has also been interviewed by law enforcement was not immediately returned.

The NRA spent at least $30 million in support of the Trump campaign, triple the amount it spent supporting Mitt Romney in 2012. There has been considerable speculation that some of that some of that money originated in Russia. Vanity Fair’s Tina Nguyen wrote last week that Butina’s cooperation with prosecutors may shed some light on those financial dealings,  “Why Maria Butina’s guilty plea should make the NRA Nervous.”

Her testimony may also illuminate funding connections to another stop on the Moscow trip — the ORSIS gun factory.  The company is owned by the wife of Russian billionaire Konstantin Nikolaev, who funded Butina’s gun rights organization, according to her statements to the Senate Intelligence committee. The firearms firm is best known for its T-5000 sniper rifle, which it supplies to the Russian military and FSB (military intelligence) forces. Experts consider the weapon so deadly it was mentioned in a 2016 Pentagon report as a notable threat to American soldiers. 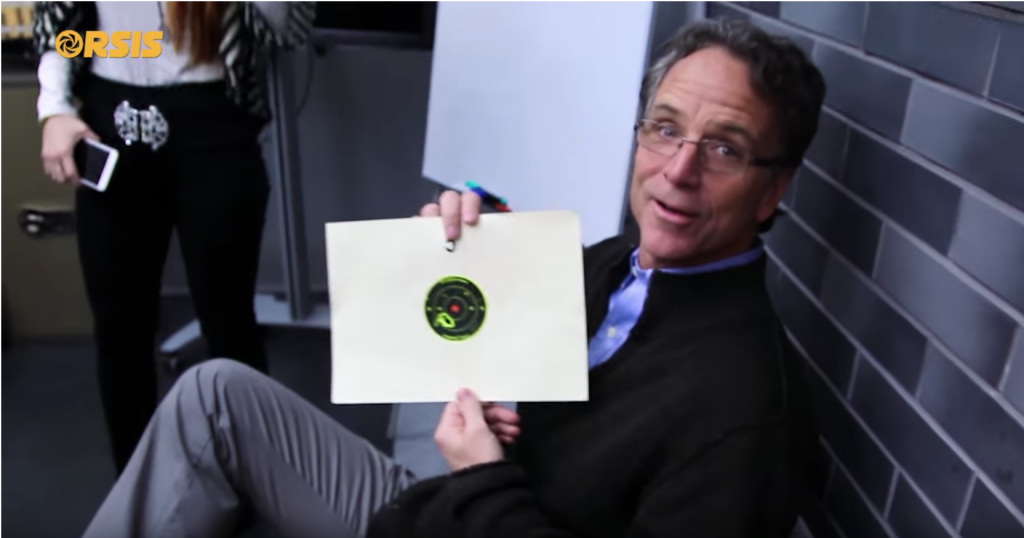 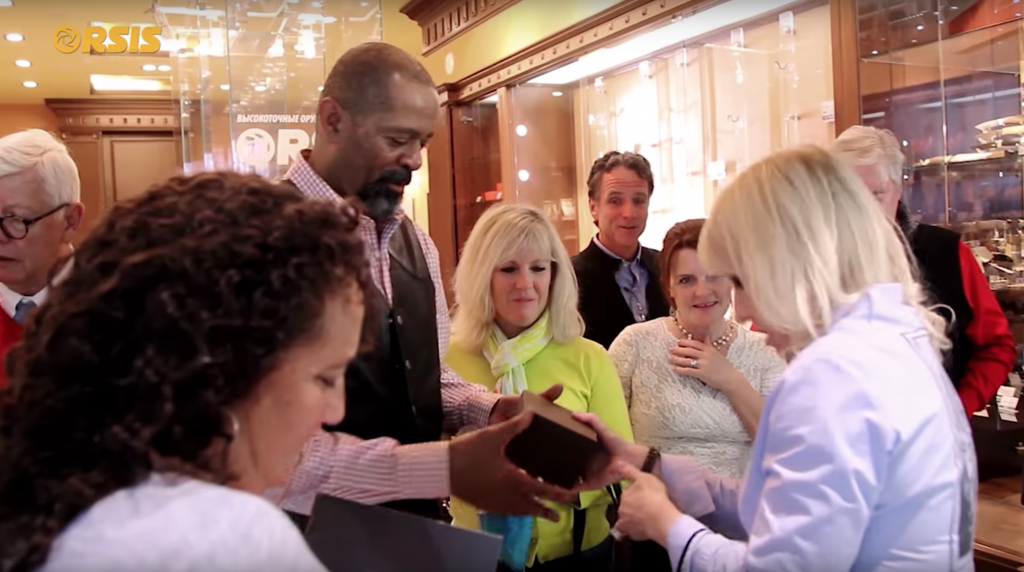 Liberatore and his wife Kim look on as Sheriff David Clarke receives a watch from Russian rifle manufacturer ORSIS.

Liberatore’s wife Kim, Sheriff Clarke, and other delegation members all fired ORSIS rifles during the tour — watch the video here. It concluded with a company representative handing out watches to the Americans.

Liberatore’s enthusiasm for the NRA and the firearms industry is well-documented, and explains his initial inclusion on the Moscow trip. In 2014 the NRA announced that the Outdoor Channel as the “presenting sponsor” of the NRA’s annual “Great American Outdoor Show” in a press release:

“The Great American Outdoor Show is, without question, the number one destination for outdoor sports enthusiasts,” said Jim Liberatore, President and CEO of Outdoor Sportsman Group Networks, “Outdoor Channel and Sportsman Channel are trusted supporters of the NRA and look forward to helping make each year’s show better than the last.” 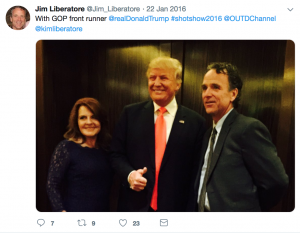 The Liberatores are also Trump supporters. They shared a January 2016 photo op with then-candidate Trump at the National Shooting Sports Foundation annual “SHOT Show” trade event in Las Vegas (which Butina also attended). In his tweet of the photo, Liberatore declared Trump to be the “front runner” six months before the Republican primary. Discussing his appearance at the show with Christian Sportsman magazine, Liberatore said,

“President Trump understood what an appearance at the awards would mean for him. President Trump has an amazing grasp of the people. He did several things throughout the campaign that I would tell my wife, ‘well, he is done now,’ yet his popularity grew. He ‘gets’ America…”

Their Colorado political donations also reflect NRA priorities. U.S. Senator Cory Gardner has received nearly $4 million from the NRA’s various entities, fifth-highest in the Senate. He is also the only candidate to have received donations from Jim and Kim Liberatore. Between the two of them they donated $3,000 to Gardner’s 2014 campaign entities ($2000 to his campaign and $1000 to his PAC).