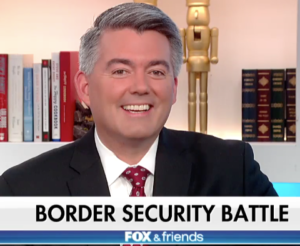 Senator Cory Gardner (R-Yuma) yukked it up on national television on Friday as a guest on  “Fox & Friends,” the morning news/talk show that is basically President Trump’s personal “Sesame Street” (Jason Salzman has more on Gardner’s “revenge majority” phrase) The topic of discussion was the looming government shutdown over funding for Trump’s big wall along the Mexican border…or as the clip is labeled, “Colorado Republican Senator Cory Gardner says the Democrats are taking revenge out on the president after winning back the majority in the House by not voting for border wall funding.”

Gardner had the bullshit meter turned up all the way to 100 for his sit-down interview, which we transcribed for your reading, uh, pleasure below. Gardner spends most of the interview bashing Democrats for not supporting billions of dollars in funding for Trump’s big wall — though Gardner himself is on the record opposing funding for a border wall. It wasn’t even all that long ago, either. Let’s take a step back in time to March 9, 2017, via Politico:

…”As far as the wall goes, I believe we have to have border security, but I do think billions of dollars on a wall is not the right way to proceed,” Gardner told a constituent, according to audio obtained by POLITICO. [Pols emphasis] “I don’t support a tariff to pay for any kind of wall.”

If constructed, Trump’s wall along the U.S.-Mexico border is expected, by some estimates, to cost $14 billion, if not much more.

Gardner told reporters last month that he didn’t think the wall was “the best idea,” but he was more emphatic in his comments Wednesday night.

“We do need security on the border,” Gardner said. “That may mean personnel. It may mean a fence. That may mean an electronic fence,” the first-term lawmaker said. “But we shouldn’t just build a wall and add billions of dollars because that’s what somebody said should be done.” [Pols emphasis] 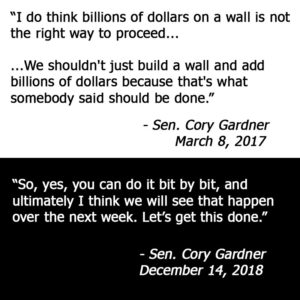 EARHARDT: Are there 10 Senators who are Democrats who would consider voting for this wall?

GARDNER: Well, I certainly hope so. This is about border security, which is something that both sides have said they supported. I hope there are more than 10 Senators on the Democrat side of the aisle that believe border security is important.

GARDNER: Right. You’ve got some border state [Senators]. You have others in the Senate who have been voting with us…

GARDNER: Like Joe Manchin, on common sense border reforms, and others in the Senate. So I don’t think it’s a stretch to say that just a few months ago you agreed to $25 billion in border security. Why are they trying to cut border security funding now? And I hope they will agree that, yes, let’s get this done.

DOOCY: And that bill you were actually part of – the $25 billion that so many Democrats were like, ‘Yeah, we’ll sign onto that.’ But what has happened? The dynamic has changed because it seems as though the Democrats have dug in. They simply don’t want to give him [Trump?] a nickel for him to build a wall.

GARDNER: It’s politics, but it’s based on a revenge majority that they just elected to the House. This is nothing more than a revenge majority. They want to fight against a President that they believe should never have been elected in the first place. So, the policies that they are pursuing are all going to be based on revenge: Investigations, cutting border security, doing everything they can to provide that revenge.

EARHARDT: Senator, it doesn’t look like the President is going to get the $5 trillion…

GARDNER: [laughing] $5 trillion would do it.

GARDNER: You know, there certainly is. You can keep going at it and getting more, bit by bit by bit. But we know the numbers. We know that border security is better when you have something like this in place. We know from the leaders of our border security agencies – by the way, which the revenge majority wants to destroy now. We know that the leaders of these agencies have said, ‘We can do a better job if we have these border security measures in place.’  So, yes, you can do it bit by bit, and ultimately I think we will see that happen over the next week. Let’s get this done.

It’s important to note that the $25 billion “border security” bill Gardner references also included a 12-year pathway to citizenship for so-called “DREAMers” — children of immigrants who are in the United States through no fault of their own — that President Trump rejected outright. The $25 billion “WALL Act” that Senate Republicans are now pushing is no shape or form similar to any of the immigration reform bills that Gardner is referencing when he says that Democrats are now trying to “cut border security funding.” This isn’t an “apples to oranges” comparison; it’s more like “apples to spaceships.”

Congressional Democrats largely do not support Trump’s obsession with building a giant wall but have consistently supported proposals to strengthen border security through the use of sensors, drones, and other non-wall means.

As for the duplicitous Gardner, it’s really not a mystery as to why his approval ratings are in the toilet — even among Republicans. Gardner is a man of his words…whichever words he thinks serve him best at any given moment.