Get More Smarter on Monday (September 10) 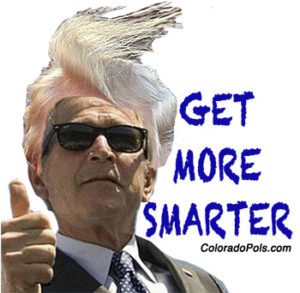 Shana Tova, friends. It’s time to Get More Smarter. If you think we missed something important, please include the link in the comments below (here’s a good example). If you are more of a visual learner, check out The Get More Smarter Show.

► Journalist Bob Woodward, whose reporting on Watergate helped end the Presidency of Richard Nixon, says that he has never seen an administration as disastrous as the one occupying the White House today. From CNN:

“I’ve never seen an instance when the President is so detached from the reality of what’s going on,” Woodward told NBC’s Savannah Guthrie in a Monday interview, adding: “This has not been treated seriously enough. Some of the things Trump did and does jeopardize the real national security.”…

…One of the two reporters primarily responsible for a series of stories detailing corruption at the highest level of the Nixon government and a man who has spent the last four decades reporting and chronicling how each successive president since Nixon has dealt with the immense challenges of the office, is now suggesting that what he saw in the Trump White House is unlike what he’s seen before.

That’s a big deal — especially because it confirms much of the daily reporting that has come out of this White House since Trump became President 19 months ago.

Meanwhile, Trump is trying hard to dispute the idea that his administration is a runaway train. As Stephen Collinson writes for CNN:

Donald Trump is making an aggressive effort to stem the crisis of authority afflicting his presidency at a critical moment.

With midterm elections looming, he’s facing new questions about his fitness for office, and he’s hunting a hidden rebel within his own camp.

The President took immediate steps to address the situation on Monday, hitting out at Bob Woodward’s new book, which, along with an op-ed by an anonymous senior official in the New York Times, presents a devastating picture of his performance…

…Typifying the sense that what would once seem absurd now counts for normality in this White House, Vice President Mike Pence on Sunday offered to take a lie detector test to prove he was not the author of the op-ed which assailed Trump for “half baked, ill-informed and occasionally reckless” leadership.

► As Blair Miller of Denver7 reported late Friday, State Treasurer Walker Stapleton — who would like Colorado voters to promote him to Governor — doesn’t seem to show up at his current job very often:

Logs of keycard and access code usage at the private doors of the Capitol, which can only be used by state employees and lawmakers, show that Stapleton hasn’t used his keycard or access code once during his second term in office, which CSP confirmed was the case. [Pols emphasis]…

…Stapleton’s campaign spokesman, Jerrod Dobkin, sent Denver7 the following statement: “As the Colorado State Patrol confirmed, Walker uses the south entrance to enter the Capitol.” However, CSP did not confirm that Stapleton uses the south entrance, only that it was possible to use the public entrances without a keycard if a state employee ID is shown. [Pols emphasis] Logs from 2011, when Stapleton used his keycard, shows he almost always used the entrance on the south side of the building.

In short, there are no records of Stapleton going to his office in the State Capitol at any time during his second term as State Treasurer. That’s not good.

► Nebraska Sen. Ben Sasse, a regular critic of the Trump administration, says that he considers leaving the Republican party literally every day. From CNN:

Republican Sen. Ben Sasse said Sunday that he thinks about leaving the GOP “every morning.”

The Nebraska senator’s comment comes after he tweeted last week that he “regularly” thinks about switching to become an independent.

Sasse expanded on the thought Sunday on CNN’s “State of the Union,” telling anchor Jake Tapper, “I probably think about it every morning when I wake up and I figure out, why — why am I flying away from Nebraska to go to D.C. this week? Are we going to get real stuff done?”

Is Sasse really concerned enough about the state of the Republican Party that he might actually become an “Independent”? Color us skeptical.
► If you don’t think Congressman Mike Coffman (R-Aurora) is absolutely terrified at the prospect of being tied to President Trump, just look at this.

► Republican Attorney General candidate George Brauchler used to be a regular presence on right-wing talk radio shows in Colorado. He would prefer that you didn’t know anything about this.

► Hurricane Florence is on track to hit the East Coast this week as one of the strongest storms in several decades. North Carolina and South Carolina currently appear to be in the direct path of the storm.

► As Politico reports, Republicans are very worried about “Scott Walker fatigue” in Wisconsin:

There’s every reason to believe this is the beginning of the end for Scott Walker.

Elsewhere, Republicans are expending significant resources in a state — Texas — that they never thought they would need to worry about.

► Business and outdoor groups continue their heavy push to get the Senate to fund the Land and Water Conservation Fund (LWCF).

► An effort to reach a compromise on dueling ballot measures regarding the oil and gas industry failed to find an agreement. Friday was the deadline for initiatives to be withdrawn from the 2018 ballot.

► Former Congressman Tom Tancredo is definitely a problem for Republican gubernatorial candidate Walker Stapleton as he tries to reach moderate and swing voters, but at least Tanc makes the base happy!

► It’s definitely a good thing that state Rep. Judy Reyher won’t be back in the legislature in January.

► President Trump drafted, but did not send, a Tweet about South Korea that scared the hell out the Pentagon because it could have signaled North Korea that the U.S. was preparing an invasion.