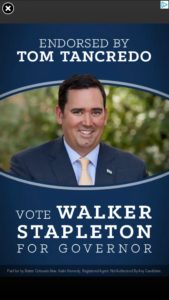 This morning, former congressman and controversial supporter of Republican gubernatorial candidate Walker Stapleton, Tom Tancredo, went on the Peter Boyles Show to address the recent controversy over a fundraiser Tancredo headlined for Stapleton’s campaign. Tancredo’s high-profile support for Stapleton has turned seriously problematic after local reporters questioned Stapleton’s repudiation of his own family ties to the Ku Klux Klan, noting that Tancredo is a past board member of the white nationalist organization VDARE.

So who did Tancredo bring on the radio to vouch? The founder of VDARE, Peter Brimelow!

Which, as you’re about to discover, was a very large mistake:

Here’s the transcript of the two separate clips of audio playable above:

BOYLES: But I want to ask you a principled question, first: Before either of those media outlets smeared you, did any of them ever call you and want to talk to you?

BRIMELOW: Oh, no! Of course not! They never…

BOYLES: That’s my point! There! I rest my case! Tommy…

BRIMELOW: What they do, Peter, is they rely entirely on the Southern Policy Law Center–which, of course, is a racket, you know–it’s in the business of frightening out all the Jews into giving large amounts of money [Pols emphasis] by turning up those Neo-Nazis roaming around. And it’s raised close to a half a billion dollars, doing that. And so they need to find neo-Nazis around. And if they can’t find any, they make it up.

TANCREDO: He took over my seat–the Sixth Congressional District–promising to be a strong, strong supporter of the positions I had taken on immigration. Well, that lasted until–of course–redistricting and he lost a little bit of Republican support, and all of a sudden he turned…

You know, it’s one thing to say, “Well, let’s be judicious,” but not be a complete chameleon.

It shouldn’t be necessary to remind readers and listeners that Brimelow was–we assume–trying to refute the allegation that VDARE is a racist organization. As you can see, that goal was not accomplished! It’s extremely difficult to imagine how Stapleton can let this go without some kind of response–that is, unless it’s true that Stapleton is counting on voters who align with Tancredo to win and dares not alienate them.

But for anyone trying to hold together the farce of Stapleton hugging Tom Tancredo and “condemning racism of all forms” at the same time, this is the end of the road.