If you’ve been alive this week, you are surely aware that Donald Trump’s Presidency is imploding from within while the Big Orange Guy storms around the White House looking for traitors to his one-man cause.

Trump’s approval ratings were in the toilet well before this dumpster fire of a week, and as Paul Waldman writes for the Washington Post, that could mean serious trouble for Republican candidates around the country:

With only two months remaining before the midterm elections, it’s difficult to imagine something will happen to turn his fortunes around. Unemployment is about as low as it can go. Republicans in Congress have stopped trying to do any ambitious legislating (if they can keep themselves from forcing another government shutdown, it will be a victory). And while it is theoretically possible Trump could engineer some kind of resounding foreign-policy triumph during the next few weeks, it seems rather unlikely.

Which would mean that between now and November, this is about as good as it’s going to get. As pollster Gary Langer pointed out, Trump has the lowest approval rating of any president heading into his first midterm election (the polling data go back to 1954). But what is most striking is the intensity of feeling he produces in his opponents. In the latest Post poll, 53 percent of respondents disapprove of him strongly, while only 7 percent disapproved of him somewhat. If you don’t like Trump, you really don’t like Trump.

Democrats hope it means the people who really don’t like him will stampede to the polls in November to register their discontent by voting out any and all Republicans — and they might. [Pols emphasis] As Harry Enten of CNN argues, “For Republicans to have a realistic (i.e., within the margin of error) shot of maintaining control of the House in 2018, Trump’s approval rating must remain at least in the low 40s nationally.”

Congressman Mike Coffman (R-Aurora) is exactly the kind of Republican incumbent that should be very worried about Trump’s impact on his re-election. On Friday, Coffman’s campaign telegraphed their Trump fears by promoting this out-of-nowhere statement from former Independent Presidential candidate Evan McMullin:

The key part of the statement is at the beginning of the second paragraph:

[Coffman] is now under attack by super PACs trying to mislead members of Colorado’s 6th district by casting him as a yes-man for President Trump, but Mike is nothing of the sort. He is an independent-minded leader who has remained committed to American values, his constitutional duties in Congress and serving his district, even when it puts him at odds with the president and his own party.

The problem with this statement is FACTS.

In July 2016 Coffman made national news after running a television ad in which he promised to “stand up to Trump” if the Republican nominee made it through the General Election. It didn’t take long for Coffman to shift his position; Coffman votes with Trump an astounding 95.6% of the time: 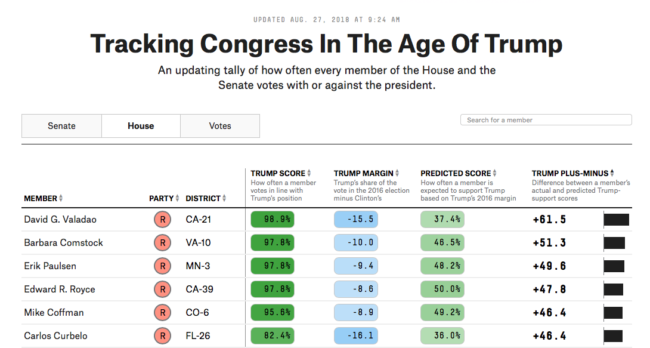 Democrat Jason Crow is giving Coffman the toughest re-election fight in his 30 years as an elected official, and Coffman’s coziness with Trump is giving Crow and his allies plenty of fodder for television ads; this spot from the League of Conservation Voters is probably the ad that McMullin references in his statement.

Voters in CO-6 likely don’t give two shits about what Evan McMullin thinks about Coffman, but the fact that Coffman’s team is trying so hard to promote this tells you everything you need to know about their fears in November.