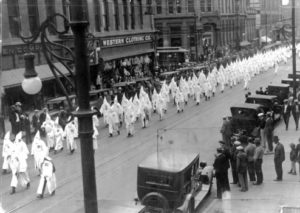 Members of the Ku Klux Klan march in a parade on Larimer Street in Denver, Colorado May 31, 1926.

A story this weekend from the Denver Post’s John Aguilar and Ben Botkin once again revisits the story that Walker Stapleton used to lead with, and now runs away from: his great grandfather Benjamin Stapleton, who gives Walker most of his “Colorado native” bonafides but also saddles him with a legacy of Ku Klux Klan dominance of local politics during Benjamin Stapleton’s time in office.

This latest recap takes a fairly amusing turn as local members of the pseudo-centrist pundit class practically beg Stapleton to address the situation, after his responses to previous inquiries on the subject have revealed he really doesn’t know what to say:

“You can’t just ignore it,” said Eric Sondermann, a political analyst who has long kept an eye on state politics. “In this era of independent expenditures, it’s going to continue to come up.”

By independent expenditures, Sondermann is referring to the millions of dollars that interest groups not affiliated with political candidates have pumped into Colorado elections in recent years and will undoubtedly do again in 2018. Whether a third-party group decides to run an ad attempting to link Stapleton to his great-grandfather’s racist leanings, the candidate needs to be prepared — even proactive — about blunting any such attack, he said…

Pollster and political analyst Floyd Ciruli said Stapleton need not shine a light on the issue unsolicited but should have a response ready to go if the topic comes up.

The problem with this too-public telegraphing of concern to Stapleton’s campaign is that it’s already well past time to address the story. This weekend’s prominent piece in the Denver Post follows a similarly high-profile write-up in the New York Times two weeks ago, and Stapleton’s response to that story was totally inadequate. Stapleton has staked his dubious “Colorado native” identity on his great-grandfather, and in the 2009 campaign video you can watch above he celebrated Ben Stapleton’s leadership of Denver with no mention whatsoever of the Ku Klux Klan’s control of the city.

It’s not just that Walker Stapleton wants to have it both ways on his family’s KKK ties. For almost a decade, Stapleton has had it both ways. He has freely traded on his Stapleton family name to advance in Colorado politics without having to answer for the dark side of that legacy. Stapleton has had innumerable chances to address this, and has chosen not to.

At this point, any change of course looks like an election-season ploy–because it is. Maybe six months ago, it could have been different. Or in 2010.