In Which James Coleman Cheerleads for the Oil and Gas Industry 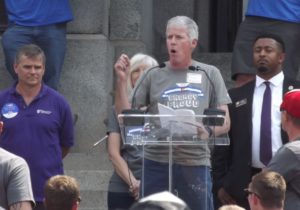 On July 26, State Rep. James Coleman (D-Denver) cheerfully touted his 100% rating through the 2018 legislative session from Conservation Colorado, one of the state’s foremost organizations focused on conservation and environmental policies. Coleman even acknowledged his 100% rating by Tweeting a message with the tagline, “Thanks for your support!.”

Seven days later, Coleman was a featured speaker at an “Energy Proud” event organized to praise the many wonders of oil and gas extraction and the controversial process of hydraulic fracturing. The event was heavily promoted by oil and gas interests, including the Colorado Oil and Gas Association (COGA), that are generally not worried about any of the conservation and environmental stewardship ideals that Coleman boasted about one week earlier.

The “Energy Proud” event was hosted by energy companies on the west steps of the state Capitol before a few thousand people, and comes just days before an August 6 deadline for anti-oil and gas proponents to submit signatures for a proposed 2,500-foot setback in Initiative 97.

“It’s not often that I get to speak to a crowd of revolutionaries,” said former Interior Department Secretary and former Colorado Attorney General Gale Norton. “That’s exactly what you are because you have accomplished a revolution.” [Pols emphasis]

Two days after this “Energy Proud” event, proponents of a measure designed to weaken local control of oil and gas drilling submitted petition signatures to get Initiative 108 onto the November ballot.

This was all a carefully-orchestrated public relations effort for the oil and gas industry — or the “revolutionaries,” as Gale Norton called them — as they seek to drill holes in every piece of land they can find in Colorado. The cherry on top of this bullshit sundae was to find a Democratic state legislator who could be easily convinced to stand up in front of a crowd of oil and gas people and sing their praises. 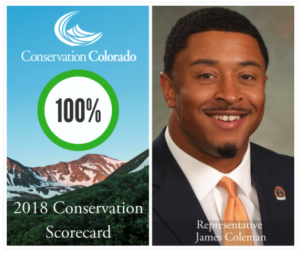 The Denver Democrat spoke briefly to the assembled crowd after an introduction from Liberty Oilfield Services CEO Chris Wright, beginning his remarks with platitudes about “hardworking Coloradans” and taking a bipartisan approach to the issue of oil and gas extraction. Here’s an excerpt from Coleman’s remarks, which you can watch in full below:

A lot of times, we put politics in front of relationships. I had the opportunity to get to know Chris Wright, the man who just introduced me, many years before I ran for office. When the recession hit in 2008, many folks got laid off. But his company, Liberty — which is why I’m proud of him and what he’s done — he didn’t lay off one person because of what was happening in the economy. [Pols emphasis] That is the kind of person that we need.

These are some interesting comments from Coleman. Did he come up with these remarks himself, or did he just repeat talking points that were handed to him? The reason we ask is because Chris Wright launched Liberty Oilfield Services in 2012. Its predecessor company, Liberty Resources, was founded in 2010. Liberty didn’t lay off anyone following the 2008 recession because the company didn’t yet exist.

Anyway, let’s get back to Coleman’s talking points:

These are the kind of people that we need. The kind of leaders who care about people and take care of Coloradans. Because at the end of the day, all we care about it providing for our families, serving our neighbors and our communities, putting clothes on our backs, food on the table, roofs over our heads. That’s what you all do and are allowing us to do because of the great work you do here in the state. Thank you for all you do.

Of course, these are also the kind of people who can’t be bothered to worry about whether their extraction methods are harmful to local communities and schools. As Think Progress writes:

According to a Denver Post investigation, in the eight months following a deadly April 2017 gas explosion in the town of Firestone, at least a dozen explosions and fires have been associated with industry pipelines along Colorado’s Front Range. That area is part of the Southern Rocky Mountains.

Low-income communities of color in Colorado have also fought against drilling efforts along the Front Range. And studies have shown elevated cancer risks in parts of the wider area…[Pols emphasis]

Republican gubernatorial candidate Walker Stapleton was also a featured guest at the “Energy Proud” event, and he gleefully played up Coleman’s statements in a separate interview:

Representative Coleman is running for re-election in HD-7, a safe Democratic district in northeast Denver with a sizable minority population and low-income communities of color. In fact, HD-7 contains a larger percentage of African-Americans and Latinos than any other state legislative district in Colorado. Coleman’s district is also near the Suncor Oil Refinery that regularly spews hydrogen cyanide gas across north Denver.

Maybe Coleman really believes that he is a true conservationist who listens to the concerns of the people in his district but genuinely supports the oil and gas industry anyway. Maybe not. Either way, you can be sure that voters are going to be regularly reminded of Coleman’s duplicitous nature should he ever attempt to seek higher office in Colorado.