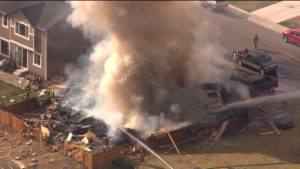 In April 2017, this home in Firestone exploded, killing two people and severely injuring two others. Investigations later linked the explosion to oil and gas drilling operations.

The oil and gas industry has been spinning its wheels in the last year trying to flex its political muscle (that’s right, we just worked two cliches into one lede) as Colorado voters increasingly ignore the industry’s attempts at upgrading its image. And that was before new reports from an updated class-action lawsuit related to last year’s deadly explosion of a home in Firestone that casts Anadarko Petroleum Corporation in a particularly-evil glow.

We’ll explain how this may have a significant impact on the 2018 election in a moment. But first, here’s Blair Miller of Denver7 summarizing a growing story that was first reported by the Colorado Independent and the Denver Post:

Several former employees of Anadarko Petroleum Corporation say the company knew of safety risks involving thousands of its oil and gas wells in Colorado, but ignored the risks as it expanded operations here before a leaking pipeline exploded in Firestone, killing two people and injuring two more.

The claims were made in a November amended complaint in a class-action lawsuit filed in the U.S. Southern District Court of Texas, on which Denver7 first reported last year when it was filed.

But in the updated filing, six former employees of Anadarko, including some who worked in Colorado, claim that the company’s Colorado operations were a “ticking time bomb” and that when they told other company brass about concerns, those were brushed aside.

“I have no ax to grind. But, you know, people died, and it made everybody reevaluate whether this was the company they thought it was.”

Susan Greene of the Colorado Independent talked with several former Anadarko employees about Anadarko’s apparent negligence. Their comments are stunning. Former Anadarko government relations executive Chris Castilian — once a deputy chief of staff to Republican Gov. Bill Owens — is identified in the updated legal filing as “FE1” (“former employee #1). From the Colorado Independent:

…Castilian said the company didn’t inspect much more than “a tiny proportion” of the wells it acquired from Noble. He said executives were fully aware of the safety risks and made a spreadsheet ranking several hundred wells as risky and problematic. Even then, the complaint alleges, they were intent on keeping wells in production for financial reasons stemming partly from the fact that they lease most of the land on which Anadarko operates in Colorado. Contractually, most of those leases expire if the company isn’t using a well. So, as former employees tell it in the complaint, the company kept faulty wells in production to avoid having to renegotiate leases, presumably at much higher prices.

Castilian attended executive meetings at which these decisions were discussed and said executives overrode workers’ safety concerns by prioritizing repairs on wells and equipment that supported active production over repairing those closest to development. Citing him as a source, the lawsuit says that “A well’s potential safety risks, and whether it was located in a residential area or near a school, played no part in whether it was chosen for remediation.” [Pols emphasis]

Former Anadarko government and public affairs manager Robin Olsen is the person named “FE2” in the lawsuit, and her comments are equally damning. Again, from the Independent:

The lawsuit cites Olsen saying that one single employee was responsible for checking the safety of all of Anadarko’s flow lines in the Wattenberg Field in Weld County when there should have been 12 to 20 safety workers. It also cites her saying that she took environmental and safety concerns to her boss, Vice President for Corporate Communications John Christiansen, about 12 times between late 2016 and early 2017, warning him that there would be problems if the company didn’t address them.

In January 2017, an Anadarko well blew out of control, spilling 28,000 gallons of oil and wastewater near Hudson north of Denver. Executives blamed the spill on workers rather than on their own decisions to cut safety and repair efforts. The suit cites Olsen saying that Anadarko did not inform state regulators about key safety problems that led to the spill.

Also, according to the complaint, Olsen said Christiansen told her to “keep quiet” and that her job “was to shovel shit, and to clean up the messes” the company’s employees made. [Pols emphasis]

The Independent also talked to a former Anadarko safety manager, who wished to remain anonymous, who said “that he has struggled with anger, guilt, and anxiety since the Firestone blast, constantly wondering where else his crews didn’t have the resources to prevent disaster.” The former safety manager prays daily for the families impacted by the Firestone explosion and has often considered reaching out to Erin Martinez, a survivor of the blast.

“But what would I say? What would I tell (her)? That those tightwads in corporate couldn’t give a shit about the guys who worked on those wells or the people who lived near them?”

These are incredibly powerful comments that reflect horribly on Anadarko Petroleum and the oil and gas industry as a whole — an industry still reeling from the Firestone explosion and other subsequent spills and accidents that received plenty of press coverage. Oil and gas interests have long played a major role in Colorado politics — usually more aligned with Republican candidates — but that influence seemed to weaken after industry-backed candidates and ballot measures suffered heavy losses in the November 2017 elections (a trend that was confirmed with additional failures in April 2018).

Anadarko and Noble Energy are the primary investors in the public relations “organization” Coloradans for Responsible Energy Development (CRED), which has had a heavy-handed role in promoting oil-and-gas-friendly candidates in recent years. The industry is also putting a lot of money in support of Republican gubernatorial frontrunner Walker Stapleton, who pledged his undying support for oil and gas drilling in his campaign announcement last fall.

Christopher Osher of the Denver Post profiled CRED and the $80 million in political investments from the industry in a big story in July 2017. Castilian explained the idea behind CRED to the Colorado Independent as “purchasing a social license to operate in Colorado.” But the Firestone explosion and the subsequent lawsuits are changing the calculus for the oil and gas industry, which may now need to focus most of its attention on repairing a tattered reputation instead of trying to pull political levers.