Denver Oil Refinery Could Be Killing Us All 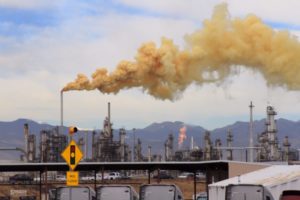 The Suncor oil refinery in Denver spews yellow smoke in this photo from late 2016.

Bruce Finley of the Denver Post reports on some positively-terrifying news about an oil refinery in North Denver:

Community groups in Globeville, Swansea and Elyria this week petitioned the Environmental Protection Agency to require Colorado health officials to set a limit that protects people and at least require Suncor to disclose emissions of the gas to local emergency responders.

CDPHE air quality control officials in January approved a change to Suncor’s air pollution permit that exempts the company from a federal requirement to disclose hydrogen cyanide emissions. The officials set an emissions limit of 12.8 tons a year — higher than the 8.5 tons Suncor reported it emits — for the purpose of letting Suncor use a legal loophole that lets companies with permitted limits avoid disclosure of those emissions, a state document shows.

The Suncor facility releases 8.5 tons per year of CYANIDE FUCKING GAS into the air just north of downtown Denver. If you aren’t familiar with “hydrogen cyanide,” this single paragraph sums up just about everything you need to know:

Hydrogen cyanide is a colorless gas smelling faintly of almonds that at high exposure levels attacks the brain and heart, causing rapid breathing, convulsions and loss of consciousness, according to the U.S. Agency for Toxic Substances and Disease Registry. Lower level exposures are linked to breathing trouble, headaches and enlarged thyroid glands. The Organization for the Prohibition of Chemical Weapons, established under the 1997 global Chemical Weapons Convention, classifies hydrogen cyanide as a chemical weapon. [Pols emphasis]

By comparison, the Post reports that the only other source of hydrogen cyanide in Colorado is from a Pueblo plant that produces aircraft parts. State records show that the Goodrich Corporation plant releases 942 pounds of hydrogen cyanide into the air every year — about 17 times less than what belches out of the Suncor facility in Denver.

Officials from both the EPA and CDPHE declined to discuss the Suncor emissions with the Post, but that silence probably won’t last long. Public perception of the oil and gas industry shifted significantly after last year’s deadly explosion of a house in Firestone, and this news is certain to prompt a whole new wave of criticism and concern. For political candidates like Republican gubernatorial hopeful Walker Stapleton, this is not a good time to be declaring your undying support for the fossil fuels industry.