At Long Last, the Top 1% Will Finally Get Some Help

Income inequality in the United States is a growing problem. Recent data shows that the top 1% of Americans continue to seize a disproportionate share of wealth compared to the rest of us, and at a rate that is significantly outpacing our counterparts in Western Europe. This chart from the 2018 World Inequality Report explains the issue better than words can describe: 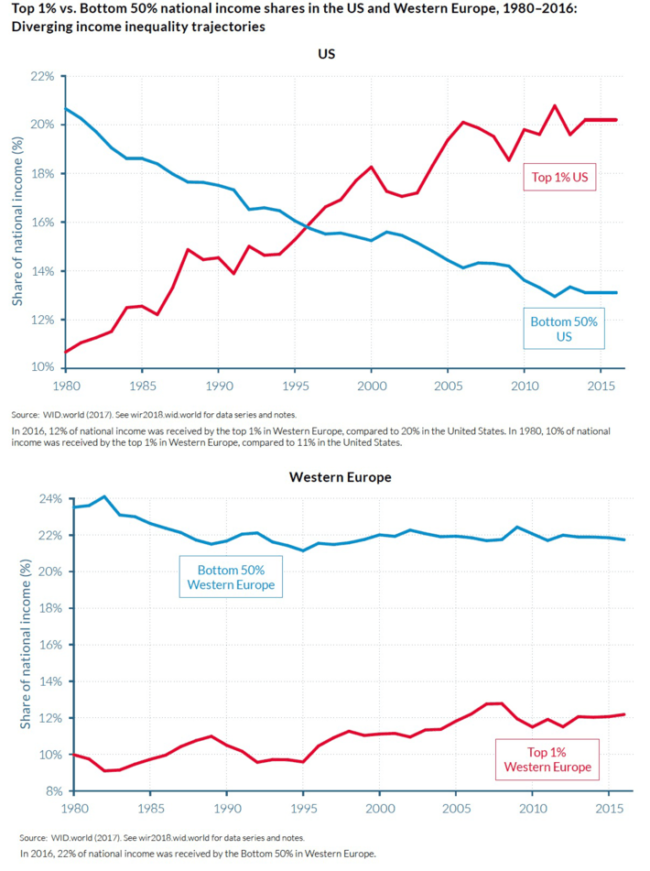 Via the 2018 World Inequality Report

This distressing trend has been turbocharged since Congressional Republicans rammed through President Trump’s tax plan last December. You remember the Great Republican Tax Plan, right? That was the one that became, unsurprisingly, a massive giveaway to the richest Americans at the expense of basically everyone else. The plan that was sold as a middle-class benefit has served largely to further enrich the richest Americans through a deluge of stock buybacks. As The Atlantic summarizes:

Companies are working overtime to make their owners richer in the short term, more so than to improve their longer-term competitiveness or to invest in their workers.

This story from Politico lays out more of the details:

A POLITICO review of data disclosed in Securities and Exchange Commission filings shows the executives, who often receive most of their compensation in stock, have been profiting handsomely by selling shares since Trump signed the law on Dec. 22 and slashed corporate tax rates to 21 percent. That trend is likely to increase, as Wall Street analysts expect buyback activity to accelerate in the coming weeks.

“It is going to be a parade of eye-popping numbers,” said Pat McGurn, the head of strategic research and analysis at Institutional Shareholder Services, a shareholder advisory firm.

That could undercut the political messaging value of the tax cuts in the Republican campaign to maintain control of Congress in the midterm elections.

Well, don’t you worry, because President Trump has a plan to make this…um…more of a problem. As the Washington Post reports, the Trump administration is aggressively pursuing a proposal to cut capital gains taxes, which would almost exclusively benefit the richest Americans, even if it means bypassing Congress to make it happen:

The Treasury Department is considering a tax cut for the wealthiest Americans through a change that would not need approval from Congress, officials said, a move that would follow a package of tax cuts last year that also benefited the super-rich…

…But the use of executive power on such a significant change to the tax law would be highly unusual and could be vulnerable to a legal challenge. Senior administration officials have discussed whether to proceed but have not concluded they have legal authority to do so. The move was rejected during the George H.W. Bush administration because it was seen as outside the scope of Treasury’s authority and only attainable via an act of Congress.

The idea has long been advocated by White House National Economic Council Director Larry Kudlow, but tax changes this drastic are typically made by Congress, not the Treasury and Internal Revenue Service. Still, Treasury Secretary Steven Mnuchin told the New York Times in an interview that he was reviewing whether to move ahead if Congress doesn’t act on its own.

This is nothing short of economic malpractice, though as we’ve seen repeatedly since Trump took office, it’s unlikely that his base of supporters will so much as blink an eye at this brazen effort. We’ll be more interested to see if Congressional Republicans will do anything to stand in the way of this proposal. Republicans who are desperately seeking to maintain their majorities in November might want to actually show voters here that they have a reason to exist. Trump has already bypassed Congress on a number of foreign policy issues, and is now trying to skip past Congress over massive — and unnecessary — tax cuts for the rich.

Will Congressional Republicans just roll over and let it happen? Hopefully that doesn’t turn out to be a rhetorical question.