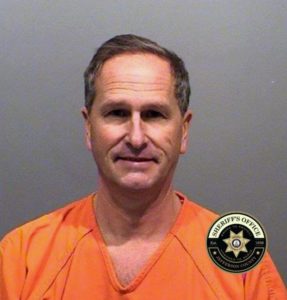 As Marianne Goodland reports for the publication formerly known as the Colorado Statesman, State Rep. Tim Leonard (R-Evergreen) is again making an ass of himself:

Republican state Rep. Tim Leonard of Evergreen is under fire for a Facebook post in which he compared women marchers to Hitler’s brownshirts, the Nazi militia members who began the campaigns of violence against Jews in pre-World War II Germany.

Leonard has two Facebook pages, one for his personal life and another for his political office and campaign. The Facebook page generating controversy is on the page that he uses to communicate with House constituents and supporters.

The post refers to a Washington Times article that poked fun at the Women’s March, which sent out a press release after President Donald Trump announced his pick for the latest U.S. Supreme Court vacancy. The press release said “Women’s March opposes XX,” leaving out the name of Judge Brett Kavanaugh. 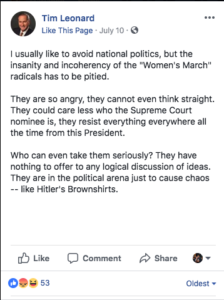 I usually like to avoid national politics, but the insanity and incoherency of the “Women’s March” radicals has to be pitied. They are so angry, they cannot even think straight. They could care less who the Supreme Court nominee is, they resist everything everywhere all the time from this President. Who can even take them seriously? They have nothing to offer to any logical discussion of ideas. They are in the political arena just to cause chaos — like Hitler’s Brownshirts. [Pols emphasis]

Of course, the guy comparing women’s rights activists to Hitler’s Brownshirts is notorious for wearing his own unique colors. Leonard holds the distinction of being the only sitting lawmaker in at least 40 years in Colorado to serve time in jail while holding elected office.

Democrat Lisa Cutter is running against Leonard in HD-25.