Here’s what Gardner said: “Exercises will continue with South Korea, we look forward to further calm and clarification from the president when he gets here.” https://t.co/IVR8Yfy5dl 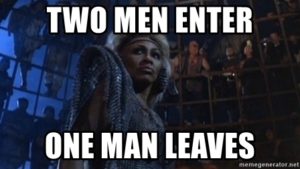 UPDATE: A spokesperson for Vice President Mike Pence adamantly denies the story that Gardner is peddling:

Pence’s press secretary, Alyssa Farah, said otherwise, and that the vice president said no such thing during the policy lunch. 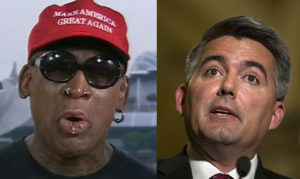 Senator Cory Gardner (R-Yuma) has worked hard in recent years to position himself next to former professional basketball player Dennis Rodman as one of this country’s foremost experts on North Korea. It’s never been clear that President Trump actually listens to Gardner on this topic, but that hasn’t stopped Colorado’s junior Senator from backtracking on prior statements on North Korea in order to attempt to fit into Trump’s inner circle.

Gardner is spending much of today cheerleading for President Trump’s “summit” with North Korean leader Kim Jong Un in Singapore, and he seems to be getting carried away with his Trump translations. Gardner was a guest on the “Business for Breakfast” show on KNUS radio this morning, where he tried (and failed) to parse Trump’s words on ending military exercises between the U.S. and South Korea. Here’s what Gardner told host Jimmy Sengenberger just this morning:

I’ve talked to the President numerous times, including just a few days ago before he left for Singapore. [I] spoke this morning with a staffer who is in Singapore from the National Security Council to make sure I get an accurate — receive an accurate readout of both the meeting — internal meeting — as well as the press stand up after the summit. So, I feel like I have a good — a good grasp on what took place there, but certainly need more information as the days come forward.

You know, look, there is going to be a lot of people talking about — and analyzing — whether this is a good move or a bad move. Bottom line is this he talked about war games. That probably means bomber overflights. Does that mean all exercises? Doubtful. Does it mean that we stop working with South Korea? No. And does that mean — and did the President qualify it with good faith efforts and progress toward denuclearization? Yes he did. So, you know, I think there’s room to move on this, as long as we have those good faith efforts and progress being made toward denuclearization. The President didn’t say we’re going to stop the exercises or joint training. He didn’t say that. [Pols emphasis]

Um, yes, he did. As CNN and every other media outlet on earth has reported, Trump was very explicit in this declaration. While Gardner tries to intimate that Trump meant something other than what he actually said, U.S. military leaders are under no such illusion. As the Military Times explains:

“Under the circumstances, we are negotiating a comprehensive and complete deal [on denuclearization]. It is inappropriate to have war games,” Trump said in a press conference following the summit in Singapore. “Number one, we save money. A lot. Number two, it is really something they very much appreciated.”

In that press conference in Singapore, Trump also said that he would like to withdraw the thousands of U.S. forces stationed on the Korean peninsula, but would start with cancellation of military exercises.

Gardner appears to be getting some flak for “mansplaining” Trump’s comments, so he reacted this afternoon by throwing Vice President Mike Pence under the bus:

But…but…that’s not what mom said!

We’re not really going out on much of a limb when we say that President Trump’s decisions probably supersede whatever Vice President Mike Pence tells Gardner separately. Have fun explaining this one, Cory!