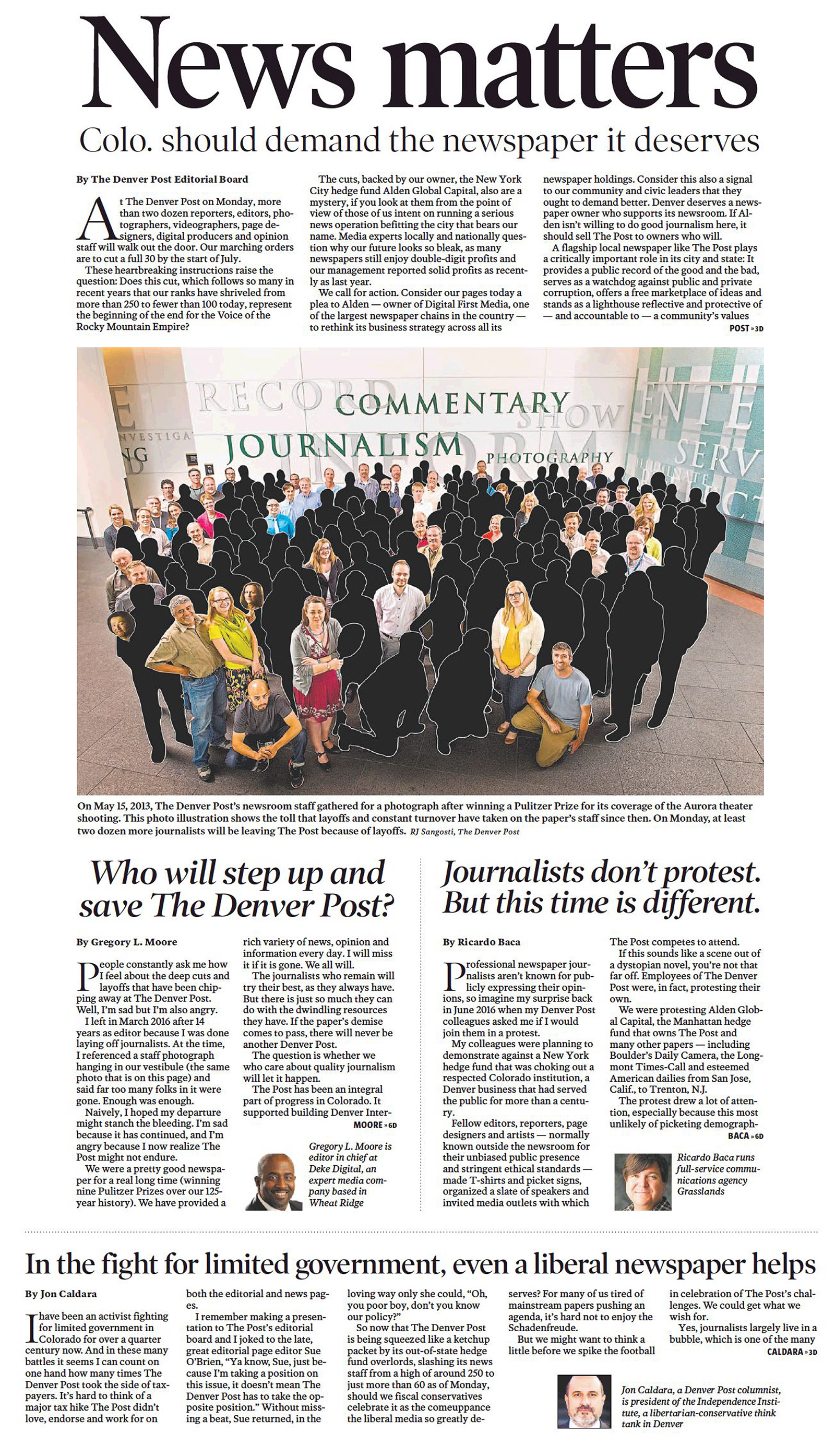 A remarkable act of desperate rebellion is unfolding at the state’s newspaper of record, as the Huffington Post reports:

In a move described as both extraordinary and brave, the editorial board of the Denver Post publicly skewered its hedge-fund owner in a searing article published Friday. The message was plain: Sell the paper before it’s too late.

The Post has endured multiple rounds of layoffs since 2010, when Alden Global Capital purchased the paper’s parent company, Media News Group (now Digital First Media), and adopted what’s been described as a “strip-mining” approach to management. According to the editorial, Alden has slashed the Post’s staff by almost two-thirds — and that’s despite the paper’s reported profitability. As of next week, only about 70 staffers will remain.

“Denver deserves a newspaper owner who supports its newsroom,” the board wrote. “If Alden isn’t willing to do good journalism here, it should sell the Post to owners who will.”

Otherwise, the journalists warned, the paper — which has been in circulation since 1892 and boasts nine Pulitzer Prizes — will be “rotting bones” in a few years, leaving “a major city in an important political region … without a newspaper.”

There’s plenty of discussion today about the unusual move by the Denver Post’s editorial staff to publicly attack the hedge fund owners of the paper, and some details like the choice of voices to defend the paper (see: Caldara, Jon) or the unsigned editorial’s disparagement of “both sides” of modern politics–we believe that an objective examination of media criticism on the left vs. right makes it clear that one side is actively undermining objectivity and critical thinking–have failed to resonate with audiences the paper definitely needs in their corner at this desperate hour.

We’ll humbly submit that is not Caldara’s fake news-devotee readership.

But that’s not what matters right now. The fact remains that the Denver Post supplies critical long-form reporting that no other outlet can or chooses to match in Colorado politics, and without not just the paper’s survival but a long-term commitment and re-investment the voters of Colorado will profoundly suffer. Everyone who works in Colorado politics has a grievance with the Post either editorially or journalistically, some of them going back a decade or more. Events like the paper’s endorsement of Cory Gardner for U.S. Senate in 2014 have left behind deep resentment backed not just by partisan spite, but an objective sense of betrayal of fundamental values held by the paper’s readers. But for every such editorial misstep you have a dozen or more sterling examples of journalism that have helped keep our state’s politics honest and transparent.

At the same time, recent examples of bad conduct by certain local media outlets remind us again how important a newsroom that adheres to strong ethical principles like the Post is. With all of this in mind, we are compelled to look past every flaw in the delivery of this weekend’s appeal from the staff of our state’s beleaguered newspaper of record for rescue from its careless owners, and add our voice to the chorus calling for the Voice of the Rocky Mountain Empire to be saved.

Just not by Phil Anschutz.