Victim-Blaming Broservative, Hack Reporting Do Grantham’s Dirty Work For Him

UPDATE #2: Next question–didn’t all these Senate aides get ordered not to talk to the press?

More than 100 Senate staff, aides and interns have been warned against speaking to journalists about workplace issues, including sexual harassment, and the trainings aimed at preventing it…

Grantham responded: “As staff members they should understand that confidentiality is important and blowing something up via the media is not what I would expect from a senator or from staff.”

And yet GOP legislative aide Andrew Knarr did talk to the press. And that’s interesting because:

Knarr said he was fired by Smallwood, but claimed the Senate Republicans “didn’t want to do it.”

Does that mean Knarr had permission to violate the directive that he not talk to the press? Perhaps because he intended to help an accused Republican? Given the big deal that was made about clamming all these staffers up, this is a question crying out for an answer.

Lots here for the press to run down–just not by Joey Bunch please. He should probably clock out.

UPDATE: So much for “broservative” legislative aide Andrew Knarr’s career in politics, ladies and gentlemen:

BREAKING: Sen. Jim Smallwood fires legislative aide after Smallwood is made aware of this snapchat.
“Mandatory 2 hour sexual harassment training. And they aren’t even gonna show me the proper way to grab a woman’s ass. This is fucking gay.”#coleg #copolitics #cogov

Today, screenshots from my legislative aide’s Snapchat account were shown to me for the first time, and within minutes, I made the decision to dismiss Andrew Knarr. Andrew’s actions were unacceptable and unbecoming of an employee of the Colorado State Senate, and I hope he takes the time to reflect and build upon this experience in his future endeavors. 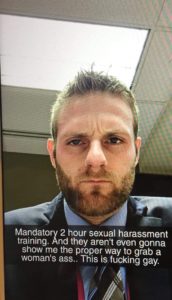 Yesterday afternoon, the ongoing controversy over allegations of widespread sexual harassment by members of the Colorado General Assembly took an unexpected and ugly turn. A story published by Joey Bunch of the Phil Anschutz-owned Colorado Springs Gazette discussed the public release of the investigative report that found credible an allegation of harassment against GOP Sen. Jack Tate. The alleged victim in that case, having waited almost two months for action from Senate President Kevin Grantham since the investigation was completed, released the report in hope of moving the process along.

Bunch’s story went in a very different direction, quoting a legislative aide who claims to have known the victim. The original version of Bunch’s story, since heavily edited, featured aide Andrew Knarr (undoctored Snapchat photo above right) disparaging the victim’s so-called “personal indiscretions” and asserting that although he does not “know everything about Senator Tate’s interactions” with the victim, he doesn’t believe her story.

Sometime yesterday evening, the story was edited to remove all of Knarr’s smearing of the victim. It retains the comments about not believing her story, even after the investigation found her allegations credible, but removed the comments about her “personal integrity.”

And then last night, we were forwarded the Snapchat photo of Mr. Knarr you can see above, where he lets known his true views on the matter of sexual harassment. Needless to say, it’s very difficult to accept him as a credible source after seeing this–and the journalistic malpractice on the part of Joey Bunch that allowed this sickening victim-blaming invective into the printed record is all the worse for it. We’re obliged to note that this is the second instance of the Anschutz-owned Gazette engaging in ethically dubious reporting to defend Sen. Tate from harassment allegations, the first being a story by another reporter featuring a gaggle of lobbyists who as it turns out had lots of business before Tate’s committee “vouching” for him.

But this was worse. Much, much worse. It would be tempting in this case to vent all the outrage over this latest ham-fisted attempt to shield a Republican Colorado legislator from sexual harassment allegations on the junior staffer who was willing to put his name on this kind of despicable victim-blaming, or the reporter who unconscionably and knowingly printed his smears.

But this is not about Andrew Knarr, and it’s not about Joey Bunch. Their misdeeds are, in the end, merely symptoms: of a toxic environment of permissible sexual harassment that has been created by Senate President Kevin Grantham. Grantham’s unilateral declaration that only instances of sexual harassment rising to the level of a crime would be punished in his chamber, and continuous undermining of the outside investigations into the actions of Republican Senators at every step of the process, has created the climate in which victims of harassment by Republican Senators are subjected to further abuse. Where victim’s allegations are presumed false, where accountability is farcical to nonexistent, and where men come out of the woodwork to smear your reputation even after an investigation proves you right.

All told, what is unfolding here is truly one of the most disgraceful episodes we’ve ever witnessed in over a decade writing about Colorado politics. And every time we think it can’t get worse, something happens to prove us wrong.

The end of this legislative session–not to mention November–cannot come quickly enough.