We can do better.

This might come as a shock to some people. Of all the elected officials that have allegations against them, I’ve been friends with … pretty much all of them. And that shouldn’t matter to the media.

It turns out that people who do bad things can be very nice people. That’s how they can continue to bad things. It’s also one reason why survivors choose not to come forward. If there are more victims, do you think they’re more or less likely to step forward now?

We have to take every allegation seriously and I think it’s absolutely appropriate for someone to refute an allegation if they were direct witness to it. I also think it’s alright if people don’t want to rush to judge their peers. Let our process (that could improve) play out first. I don’t think any of the people in the article were intending to discredit the victim or stop new reports. But those just might be the consequences.

That’s how the boys explain these things, yes! Unfortunately the victims tend to see it differently.

And yes, this is yet another shining example of the problem.

Morgan Carroll: Just to be clear. You wrote the story in question. You miss the point. I think it looks like a lineup of lobbyists (who have professional and financial ties to Tate) [Pols emphasis] defending an elected official overall suggesting that if women lobbyists think Sen. Tate is a nice guy that the he couldn’t have harassed or been inappropriate with an intern.

UPDATE: In a testy Facebook exchange with Colorado Democratic Party chair Morgan Carroll, longtime Capitol lobbyist Wendy Aiello appears to confirm that she is “working with” Sen. Jack Tate to respond to the allegations against him: 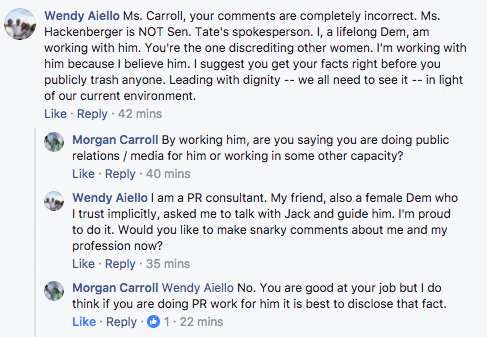 This detail is significant because Megan Dubray, who is extensively quoted in today’s story from the Colorado Statesman’s Ernest Luning (below), is listed as “of counsel” for Aiello Public Relations. None of these relationships are disclosed in Luning’s story.

Which is, of course, a big problem.

A new story from Ernest Luning of the former Colorado Statesman this morning is stoking fresh controversy in the growing scandal over widespread sexual harassment in the Colorado Capitol. The story consists of several lobbyists defending Sen. Jack Tate from allegations of misconduct leveled in a story by KUNC’s Bente Birkeland late last week.

Luning’s story is problematic on several levels–for Sen. Tate, and also the lobbyists attempting to jump on this grenade on Tate’s behalf:

“I was surprised by the story,” lobbyist Adeline Hodge told Colorado Politics. “I was definitely surprised to hear Jack Tate’s name thrown into the ring. I think we can all acknowledge there are things at the Capitol that need improvement, but I think we need to focus on the true problem areas.”

Said lobbyist Cindy Sovine-Miller: “I’ve worked very closely with Sen. Tate, and I’ve never experienced anything like that. He’s very respectful of his wife and his daughter and the women around him. I’m not trying to say sexual harassment isn’t happening at the Capitol, but you guys are pointing the finger at the wrong guy.”

The most stout–and questionable–defense of Tate came from Meg Dubray, a (nominally) Democratic lobbyist:

“What we saw in the paper didn’t show some sort of deviant pattern of behavior. The whole thing — a politician’s job is kissing babies and shaking hands. He’s a friendly guy, he’s from the South and has that sort of congenial nature to him. But it’s never been toward me or anyone I’ve seen in a less than completely respectful way,” [Dubray] said.

After repeating one of the story’s allegations — that Tate had supposedly told the anonymous intern he “really liked that skirt” she was wearing while on an elevator with her — Dubray said she doubted it happened that way but, even if it had, it was an example of Tate’s southern manners and nothing to get alarmed about.

“He always appreciates when men and women are dressed well,” Dubray said with a laugh. “But not in a creepy way, almost in a funny, goofy way.” [Pols emphasis]

That’s what they all say, isn’t it?

Of course it may be true that Tate has never harassed Dubray personally, or these other lobbyists personally, but that doesn’t rule out the possibility that he did so with others. And we’re sorry, but dismissing such behavior as “funny” or “goofy” has allowed way too many predators to continue with their predation.

Anyone who has followed the pitched battles in the legislature in recent years over legislation easing restrictions on subprime personal lenders is aware that Dubray is the lobbyist who worked with Sen. Tate on behalf of those lenders. In 2015, a last-minute bill that Dubray helped sneak through the House was vetoed by Gov. John Hickenlooper after an outcry from consumer advocates and in some cases hoodwinked Democrats.

The point? Meg Dubray has a gainful professional relationship with Sen. Tate. We haven’t looked into the other lobbyists’ disclosures, but it wouldn’t surprise us to learn the same.

Folks, how could this story be published without mentioning that? It’s irresponsible to leave that crucial fact out, even if it can be straightforwardly inferred. And it segues into the larger problem with these defenses of Tate: they seem to all be coming from lobbyists, and Jack Tate is the chairman of the Senate Business, Labor and Technology Committee.

If the conflict of interest here is not immediately evident to you, please go back and reread Ethics 101.