UPDATE #2: From the Senate floor moments ago: 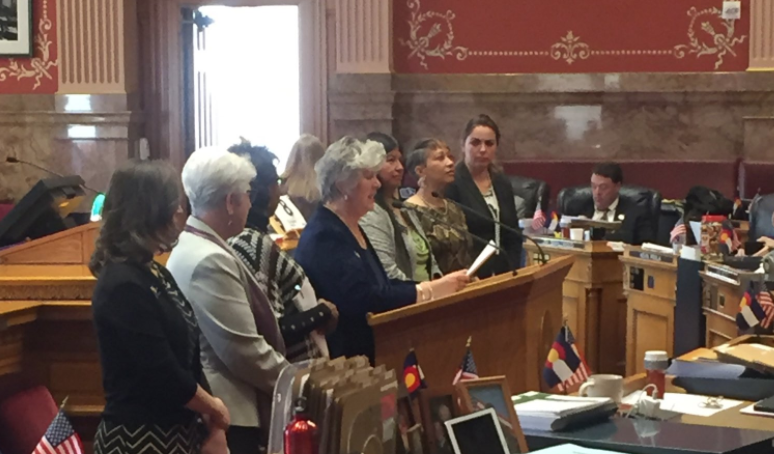 Every woman Democratic senator is on the floor of the Senate calling on GOP leaders to introduce their resolution calling for @CapitalCowboy Baumgardner’s expulsion. #coleg

Note Sen. “Handsy” Jack Tate in the background looking at the carpet.

UPDATE: The Denver Post and Aurora Sentinel both call out the GOP-controlled Senate’s inaction in hard-hitting editorials:

GOP leaders there don’t want to admit what Winter and a lot of fellow House Republicans made perfectly clear as they took turns testifying against Lebsock and others who perpetrate sexual harassment as lawmakers.

To Senate President Kevin Grantham, R-Canon City and outed pervy GOP state senators Randy “Spanky” Baumgardner and Jack “Oh, Leery” Tate, it’s not that big of a deal. They say no law was broken, so move along, folks…

There were crimes committed by these men. There’s just no law — yet — against a legislator using his or her position to extort sex from or bully Capitol staffers, lobbyists or each other.

The only difference between other forms of bribery, blackmail and assault is that the sexual kind is perfectly legal for state elected officials. 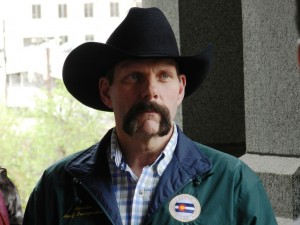 AP’s Jim Anderson reports via the Durango Herald on the escalating confrontation between Democrats in the Colorado Senate and Republican leadership of that chamber over credible allegations of sexual harassment against at least three sitting GOP Senators–allegations that have gone essentially unpunished by Senate leadership in marked contrast to the expulsion of Democratic-cum-Republican Rep. Steve Lebsock:

Colorado Democrats on Wednesday urged Republicans who control the state Senate to allow debate on a resolution to expel GOP Sen. Randy Baumgardner, who was investigated for alleged sexual misconduct.

Senate Minority Leader Sen. Lucia Guzman said that Republican Senate leaders are “re-victimizing the victims” by refusing to introduce the resolution and by insisting that alleged victims take their misconduct complaints to prosecutors for criminal investigation.

Guzman said that proposal unfairly raises the bar for those seeking redress under the Legislature’s workplace harassment policy – one which offers no strict guidelines on sanctions. 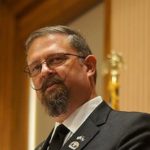 Here’s what Senate Minority Leader Lucia Guzman told Senate leadership yesterday, following Senate President Kevin Grantham’s shocking announcement this week that only cases of sexual harassment rising to the level of criminal acts would be punished in his chamber:

Senate Republicans do not need a permission slip from the DA to hold harassers accountable. [Pols emphasis] Our colleagues in the House took bipartisan action to hold Rep. Lebsock accountable — it’s past time for the Senate to do the same…[t]hese are not the words of leaders who “takes these allegations very seriously” as Senate Republicans claim to, but of someone trying to distract from their own lack of action.

Dismissing independent investigations as invalid, inappropriately blurring the lines between independent law enforcement and elected officials for political gain, pushing wilful misinterpretations of the law to shelter abuses of power — these actions by Senate GOP leadership mirror the alarming disrespect for rule of law and institutional norms that we’ve seen from the Trump administration at the federal level. We condemn this behavior in the strongest possible terms.

The exchange culminated in this statement late yesterday from Grantham’s office–a statement that is simply mind-blowing in its complete abdication of leadership responsibility:

We have also asked for further criminal investigation into all workplace harassment complaints tantamount to assault. We, as legislators, lack the tools to investigate and punish allegations of this severity. [Pols emphasis] This is why we have repeatedly called on Denver District Attorney Beth McCann to investigate these allegations and prosecute to the fullest extent of the law if she finds the necessary evidence.

Once again, Sen. Randy Baumgardner’s “punishment” after a sexual harassment complaint against him was found credible by outside investigators consisted of a letter in which Grantham attacked the investigation’s “inaccuracies, bias, conflicts of interest, and inconsistencies,” before thanking Baumgardner for voluntarily stepping down as chair of the Transportation Committee–while retaining other ranking committee posts–and taking an equally voluntary “sensitivity training.” It is absurd to suggest that this was the punishment “requested” by Guzman, though it does help explain why she withdrew from the disciplinary process in protest.

As for Grantham’s claim that the Senate lacks “the tools” to hold perpetrators of sexual harassment accountable, it’s simply preposterous. Of course he has the tools to do so, just like the House did last week when they overwhelmingly voted to expel Rep. Steve Lebsock.

The problem is that Grantham doesn’t want Lebsock’s case to be the standard in the Senate, as it would be in any other workplace in Colorado. Grantham wants to make criminal actions the standard for intervening in cases of lawmakers who commit sexual harassment, which in effect gives lawmakers impunity to engage in all kinds of harassment that doesn’t rise to the level of a crime. That precedent would be destructive to literally decades of progress in creating a safe working environment for women.

As Minority Leader Guzman said above, the present impasse is effectively re-victimizing women who have come forward to ask for justice under the complaint process Grantham himself prescribed, only to be told that the weeks-long outside investigations they participated in weren’t good enough to render judgment. We cannot emphasize strongly enough how wrong this is, and how directly counter it runs to what is happening almost everywhere else in American society.

What comes next? We can only leave you with the famous words of Mario Savio:

And tell you to stay tuned. Because the time for everyone with a conscience under the Gold Dome to “put their bodies upon the gears” is fast approaching.