Get More Smarter on Thursday (March 1)

In like a lamb. It’s time to Get More Smarter. If you think we missed something important, please include the link in the comments below (here’s a good example). If you are more of a visual learner, check out The Get More Smarter Show.

► Republican lawmakers in Colorado are doing everything they can to avoid having to make a decision on sexual harassment allegations at the State Capitol. On Thursday morning, House Republicans tried unsuccessfully to create a new ethics process to deal with sexual harassment instead of just waiting until Friday to vote on an expulsion resolution for Rep. Steve Lebsock (D-Thornton).

And then…Senate President Kevin Grantham held a press conference to announce that Republicans wanted the Denver District Attorney’s office to investigate sexual harassment allegations so that they could avoid making a decision about their own troubled caucus members such as Sen. Randy Baumgardner and Sen. Jack Tate. The Denver DA’s office replied quickly:

Denver DA reaction: “We have received nothing. We don’t know what they are talking about.” #copolitics #cogov #coleg https://t.co/cnxqU7JfRk

We’ll provide more analysis of what Republicans are trying to accomplish once we figure that out ourselves. That includes you, Cynthia Coffman.

► Meanwhile, the State House is still scheduled for a Friday vote on a resolution to expel Lebsock. It may be a difficult decision for some legislators, but as we wrote on Wednesday, there is nothing confusing about the allegations and a subsequent investigation.

► Congressional Republicans are quite flustered in the debate over gun safety after President Trump appeared to be taking a firm (for him, anyway) stand in favor of tighter restrictions on firearms.

While Republicans dawdle on gun safety, some of the largest retailers in the country are moving ahead with changes of their own. Walmart and Kroger joined Dick’s Sporting Goods in creating tighter restrictions on gun sales in the wake of the school shooting in Parkland, Florida.

► President Trump unveiled a bunch of new tariffs. From the Washington Post:

President Trump on Thursday said he had decided to impose punishing tariffs on imported steel and aluminum in a major escalation of his trade offensive, disappointing Republican congressional leaders and inviting retaliation by U.S. trading partners.

Speaking at the White House, the president said he had decided on tariffs of 25 percent for foreign-made steel and 10 percent for aluminum…

…The announcement capped an on-again, off-again episode with the president initially expected to announce the trade action on Thursday morning only to cancel amid a fierce pushback from opponents. Trump acted following a determination by the Commerce Department earlier this month that rising import volumes threatened U.S. national security.

The president’s move, relying upon a little-used provision of U.S. trade law, is expected to trigger immediate legal challenges by U.S. trading partners at the World Trade Organization and invite retaliation against American exports.

► The “first son-in-law” is in a whole heap of trouble. The New York Times reports on some pretty sketchy business transactions made by Jared Kushner after Donald Trump was elected in November 2016. Here’s a quick summary via CNN…and Denver7:

According to the Times, Kushner met with Joshua Harris, one of the founders of Apollo Global Management, on multiple occasions while advising the Trump administration on infrastructure policy, three people familiar with the meetings said.

The topic of a job at the White House was also brought up, though never materialized. In November 2017, Apollo’s real estate group lent Kushner Companies $184 million to refinance the mortgage of a Chicago skyscraper. The size of the loan, according to the Times, was triple the size of their average property loan.

► The New York Times reports on another case of terrible optics for Congressional Republicans:

Senator Richard M. Burr of North Carolina, the committee’s Republican chairman, and Senator Mark Warner of Virginia, the top Democrat, were so perturbed by the leak that they demanded a rare meeting with Speaker Paul D. Ryan last month to inform him of their findings. They used the meeting with Mr. Ryan to raise broader concerns about the direction of the House Intelligence Committee under its chairman, Representative Devin Nunes of California, the officials said.

To the senators, who are overseeing what is effectively the last bipartisan investigation on Capitol Hill into Russia’s interference in the 2016 election, the leak was a serious breach of protocol and a partisan attack by one intelligence committee against the other.

► Denver Mayor Michael Hancock is facing a sexual harassment scandal of his own.

► This is not fiscal responsibility. From CNN:

Housing and Urban Development Secretary Ben Carson is requesting that the order for a $31,000 dining set be canceled, according to a statement provided exclusively to CNN by longtime adviser Armstrong Williams.

“I was as surprised as anyone to find out that a $31,000 dining set had been ordered,” Carson said in the statement. “I have requested that the order be canceled. We will find another solution for the furniture replacement.”

Carson also said his wife, Candy Carson, had “asked if used furniture was an option,” the first time there’s been an indication that she was involved in the process. “My wife also looked at catalogs and wanted to be sure that the color of the chair fabric of any set that was chosen matched the rest of the decor,” he wrote. [Pols emphasis]

Mark this down as reason #457 as to why you don’t appoint Ben Carson to be the head of anything.

With Hope Hicks leaving the White House, longtime body man Keith Schiller long gone, there is no metaphorical family, no core group of aides who’ve been through the ringer together, come out beaten but bound forever, trusting each other, trusting the president and having him trust them.

Every president gets lonely. It’s a lonely job. But the president who spent his life desperately seeking attention and getting all of it anyone could ever want might be the loneliest one ever.

He’s about to get lonelier.

Hicks, one of the diminishing group of “originals” who’s been with him from the very beginning, isn’t just the fifth White House communications director to go in the last year—compare that to five communications directors in all eight years of Barack Obama’s White House—she’s the latest in a long and never-ending race of people elbowing each other in the face as they head to the door. Hicks’s announcement on Wednesday didn’t even make her the only high-profile aide to leave this week. Josh Raffel, who’d expanded his portfolio from battling for Jared Kushner and Ivanka Trump in the press to a wider strategic role in a strapped West Wing, made known he was leaving on Tuesday.

The White House is an absolute mess. Or as CNN would say, we’re witnessing a White House meltdown.

► Republicans who want to cut Medicaid may want to take a look at the results of this new poll showing Medicaid’s popularity with Americans.

► The Colorado legislature is considering a bill to allow out-of-state investors to put money into Colorado marijuana businesses.

► The United States may lose out on hosting the 2026 soccer World Cup because everybody hates Donald Trump. 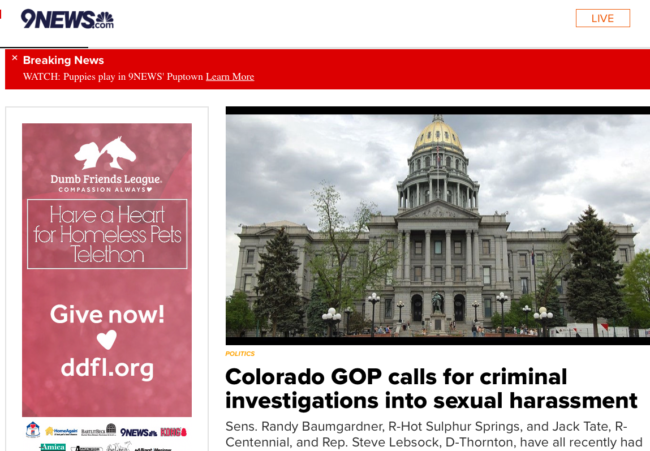 ► Democrat Tom Sullivan is running for the State House against incumbent Republican Rep. Cole Wist. Sullivan’s son was among the people killed during the Aurora Theater Shooting in 2012.