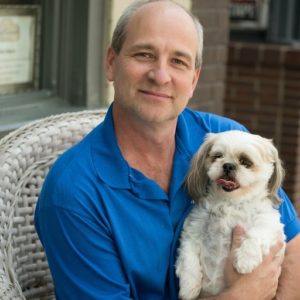 Members of the Colorado House of Representatives are scheduled to hold a vote on Friday on a resolution to expel Rep. Steve Lebsock (D-Thornton) over multiple allegations of sexual harassment over a period of several years — the first reported attempt to expel a sitting state legislator since 1915.

In advance of Friday’s vote, lawmakers have been busy reading a redacted investigative report on Lebsock’s actions provided by a “workplace investigator” from an outside group called “Employers Council, Inc.” The 35-page report, dated February 26, 2018, details 11 allegations of sexual harassment against Lebsock from five different women. According to the report, all 11 allegations are deemed “credible” by an independent investigator who interviewed at least 18 different individuals over the last three months.

One of the alleged harassment victims released a copy of the redacted report to the media on Thursday; you can read the entire document here. Expelling Lebsock requires support from 44 of the 65 members of the State House and would need to be a bipartisan vote (the current makeup of the House consists of 37 Democrats and 28 Republicans). On Wednesday, several Republicans indicated that they might not back the resolution because they are confused by the redactions that omit individual names in the sake of privacy.

State Rep. Susan Beckman (R-Arapahoe County) told Marc Stewart of Denver7 that she found the report “difficult to understand.” House Minority Leader Patrick Neville says that too much was removed from the redacted report, which makes it difficult for him to support a vote to expel. Neville also says that he has “more questions” that he wants answered because the redacted report hurts his brain. As the Denver Post reported on Wednesday:

Republicans said the jumbled nature of the report has made their decision that much more fraught. “It’s so confusing,” said House Minority Leader Patrick Neville, R-Castle Rock, who is leaning toward a “no” vote as well without more time to review the findings.

Some Republicans, such as Rep. Dave Williams, seem to be opposed to the vote to expel Lebsock on account of…people distracting him, or something:

After reading these comments, we sat down and went through the report ourselves. Our conclusion is quite simple: Anyone who is truly confused by this report is trying very hard not to understand.

Neville and Beckman would have you believe that they can maneuver through legislation dealing with the byzantine intricacies of Colorado fiscal policy…but if someone uses a black marker to scratch out a few names in an investigation report, then they are rendered completely helpless. If you truly can’t understand what’s happening in this report, then maybe you shouldn’t be in the legislature.

But don’t take our word for it. Take a look at the first paragraph of text under “Allegation 1” and see if this is really as complicated as House Republicans are saying:

If you’re really, truly, honestly confused by this, we’ll give you a hand with filling in the completely-obvious blanks. We don’t know for certain that the words in yellow are the exact words that were redacted, but this is not a monumental leap in logic: 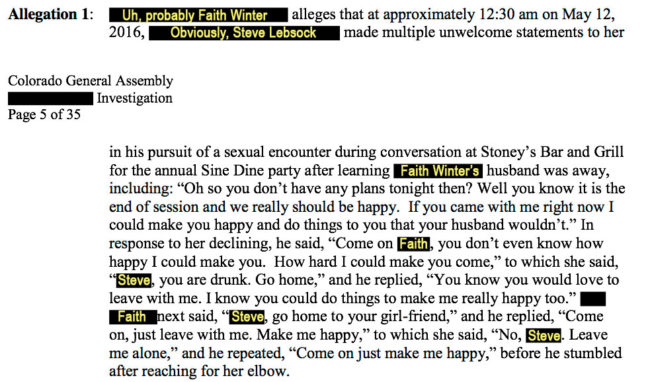 Here’s another example from the report in which a witness to the events of May 12, 2016 speaks to the investigator. We don’t know the name of the witness here, but it’s not difficult to piece this story together with the appropriate context:

Throughout the report, Lebsock repeatedly claims that he is being targeted as part of some sort of conspiracy to “take him down,” as if Lebsock somehow morphed into this generation’s John F. Kennedy in the last couple of years. The report addresses these claims and repeatedly notes that Lebsock’s denials are “not credible.” The report also notes that Lebsock and a supporter, who appears to be his ex-wife, changed their stories considerably in subsequent interviews. You can choose to believe these findings or not – but none are difficult to understand.

You also cannot ignore that there is a very clear pattern of harassment by Lebsock outlined in this report. You may be inclined to quibble with a few parts here or there, but the overall narrative is obvious.

It is perfectly reasonable for lawmakers to argue that they disagree with the conclusions of the independent report on the Lebsock allegations. We would find that argument difficult to justify given that the report finds all 11 allegations to be “credible,” but everyone has a right to their own opinion on this matter. If you want to say, “I don’t buy it,” or “this is not conclusive in my opinion,” then by all means – say that.

But don’t claim that this report is too difficult to understand. The report was not written in Latin or Egyptian Hieroglyphics. This is not rocket surgery.

We have no doubt that it would be a challenging decision to be asked to expel a sitting lawmaker for the first time in more than a century. But making tough decisions is the exact reason these legislators are sitting in office. This is what they do.

You may choose to disagree with this report and back Lebsock, or you may decide that this is more than enough information to expel the Thornton Democrat. Just don’t hide behind a black marker and refuse to make a choice.