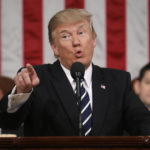 The Hill reports while the entire American political establishment tries to figure out what the hell just happened:

President Trump on Wednesday voiced support for confiscating guns from certain individuals deemed to be dangerous, even if it violates due process rights.

“I like taking the guns early, like in this crazy man’s case that just took place in Florida … to go to court would have taken a long time,” Trump said at a meeting with lawmakers on school safety and gun violence.

“Allow due process so no one’s rights are trampled, but the ability to go to court, obtain an order and then collect not only the firearms but any weapons,” Pence said.

“Or, Mike, take the firearms first, and then go to court,” Trump responded. [Pols emphasis]

So, the idea that guns could be confiscated without even having to go to court would seem to go beyond even the desires of most gun control proponents–although intervention in the case of mentally ill people in possession of guns through some kind of lawful preventative means is certainly something leaders need to be looking at. Having overshot the objective of gun safety proponents, and then doubling down to ensure everyone knows it wasn’t a misstatement, Trump may have created space for some good between the extremes to happen.

That, or a yuuuuge backpedal is about to get underway.