IN THEIR OWN WORDS: Colorado Republicans respond to being told: “clear the field” for Stapleton 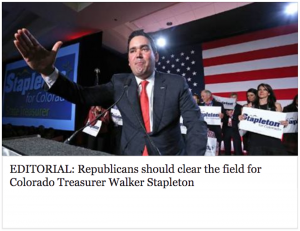 On January 14, the Anschutz-owned Colorado Springs Gazette editorial board told Colorado Republicans: “clear the field“ for gubernatorial hopeful Walker Stapleton. Fellow candidate Tom Tancredo, the primary target of the newspaper’s “step aside” directive, took to the airwaves two days later to reply directly. Meanwhile on Facebook, numerous other Colorado Republican officials and leaders responded to the Gazette’s opinion. On the whole, their reactions can be characterized as less than enthusiastic.

Here they are in their own words:

“The Republican Party is ultimately one great big coalition. All members of the coalition need to be respected, they need to feel like their voices are heard. If they feel their voices are being ignored then they will get angry and walk. They can handle losing but to tell candidates of one part of the coalition to just go away is VERY counterproductive. It is playing with fire and the status of permanent minority. The field should NOT be cleared for anyone, Stapleton, Tancredo, Mitchell, Coffman, Barlock, Robinson, Gaiter, Rundberg, Lopez and now Ann Kear should compete. Whoever wins the primary will be head and shoulders above the Democrat.”

“Many already have walked because voices not heard… Jeff Hays. What to do about it?”

“(2014 “Tancredo Problem” op-ed from the CS Gazette attached. You remember. It’s the year they tried to sell us on Bob Beauprez. In the comments, I will post this week’s op-ed where they rehash all of it, this time for Walker Stapleton. The main thing that has changed is demographics. But, I don’t see how that favors Walker.)  EDITORIAL: Republican Party needs to solve its Tancredo problem “

“Ahhh . . . such warm memories from that editorial, asking me (and Mike Kopp) to sacrifice our candidacies for the good of the brave, new, Gazette-inspired order. That paper didn’t exactly cover itself in glory that election year. But then again, it had plenty of company . . .”

“I agree with you Joe Webb as long as the day after the primary EVERYONE is boots to the ground for whoever wins.”

“It’s just the opinion of one paper. {yawn}… I just remember them taking shots at a VERY conservative State Senator Tim Neville. Neville has a very high ranking with both CUT and POL…..so, the Gazette doesn’t carry much influence with me.”

“If he can win, why is he avoiding caucus? Does he not feel confident his own party will nominate him? …Petitions are a way for the wealthy to get on the ballot without the support of their party. Period. Caucus is the voice of the grassroots of the GOP.”

“I have a long established personal policy of not making even the slightest political move or decision without first consulting the CO Springs Gazette.”

“Not…  We need another great moderate, leftist big government guy….like BEAUPREZ OR JEB BUSH OR …. pick one….. Olla open borders…”

“If any candidate is that good, they can clear the field themselves.”