Tancredo to the Gazette: Do you really think Colorado Republicans are so stupid?

(The Anschutz Machine throws down – Promoted by Colorado Pols) 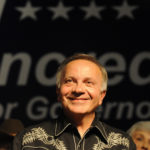 Acting as if the Republican Party in Colorado is on its death bed, the Colorado Springs Gazette trashed all the GOP gubernatorial candidates Sunday, except Colorado Treasurer Walker Stapleton, whom the newspaper presented as the last great hope:

Republicans have an unusual opportunity to elect a governor this year. Stapleton’s primary contenders would do themselves and their party a favor by selflessly clearing the field and helping him win against the odds.

While Stapleton “has earned name recognition and has a host of leadership accomplishments to run on,” the Gazette editorial stated, the other GOP candidates are paralyzed, boring, bumbling, inexperienced, unknown, and/or clueless.

Former Congressman Tom Tancredo is described as a “niche candidate with a single message,” who “invariably returns to his stark views about federal immigration enforcement.”

Attorney General Cynthia Coffman “has failed to launch a primary campaign that shows promise of traction,” states the Gazette.

“Several of the other candidates pitch mostly interchangeable platforms, lack substantial public service, and share the uphill battle of achieving name recognition,” concludes the newspaper, which is owned by Republican billionaire Phil Anschutz, through Clarity Media.

And what does Tanc, who bears the bunt of the Gazette’s criticism, have to say about it?

“Why don’t we let the people of this state figure that out.” Tancredo told KNUS radio Monday when asked to respond to the Gazette editorial. “…Do you really think the Republicans in this state don’t see the needs that we have, don’t look at this whole picture, don’t look at, you know, who would be the best candidate against a Jared Polis? And let’s let them make that decision, right?  [The Gazette is] assuming the Republicans are so stupid as to nominate me, even though no one believes I can win this thing.” [Listen here at 29 min 30 sec.]

Tancredo also told the radio station, as he has in the past, that he’d be governor today if establishment Republicans hadn’t succeeded in knocking him out of the gubernatorial race in 2014. (See related posts here and here.)

The question is, is the Gazette’s brazen desperation to stop Tancredo premature? Quite possibly, given the money flying around out there.

But you can see why the Gazette is worried. Tanc isn’t looking any weaker than he did when he jumped out the gate as the front runner to win the GOP nomination.