Get More Smarter on Tuesday (January 16) 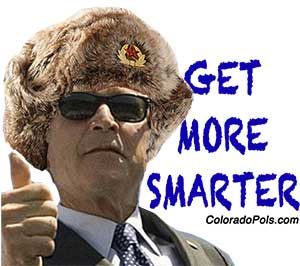 Cold enough for ya? It’s time to Get More Smarter. If you think we missed something important, please include the link in the comments below (here’s a good example). If you are more of a visual learner, check out The Get More Smarter Show.

► President Trump is blaming Democrats for a potential federal government shutdown, but Republicans would unquestionably own any funding problem. As CNN notes, it has been nearly 40 years since the last government shutdown when one political party controlled both chambers of Congress and the White House. According to a story from NBC News, Democrats are well-prepared to push back on Trump’s blame game:

Sen. Patrick Leahy, D-Vt., said a shutdown would “humiliate” the country, the president and the GOP, which controls Congress.

Meanwhile, President Trump Tweeted on Sunday that discussions on DACA — the program to protect undocumented immigrants brought to the United States as children — is “probably dead.” Immigration policy discussions had been a key part of the debate over a potential government shutdown.

► The New York Times reports that former White House chief strategist Steve Bannon has been subpoenaed by special counsel Robert Mueller in the investigation into potential collusion between Russia and the Trump campaign in the 2016 election.

► The Colorado Springs Gazette is pushing all of its chips into the middle of the table in support of Walker Stapleton for the Republican gubernatorial nomination. Former Congressman Tom Tancredo, who is among the GOP frontrunners in 2018, responded to the editorial board’s endorsement of Stapleton during an appearance on KNUS radio.

As we discussed in a separate story today, the Gazette’s early backing of Stapleton is pretty ridiculous for a news organization.

► Senator Cory Gardner (R-Yuma) had an absolutely terrible year in 2017, and he’s picking up right where he left off in 2018.

► Speaking of Gardner, Westword profiled the Yuma Republican’s newfound efforts to be Colorado’s weed champion, and they aren’t buying it:

Gardner’s rebellion against Trump so far has almost exclusively been confined to rhetoric. [Pols emphasis] As a member of Republican Party leadership and as a longtime conservative dating back to his days in the House of Representatives, Gardner is a safe Republican vote.

FiveThirtyEight’s so-called Trump score, which measures a member of Congress’s voting record compared to how their individual state voted in the last presidential election, pits Gardner as the single senator whose voting record least corresponds with how his or her state voted in 2016. Because Colorado voted for Clinton by a wider margin than Nevada or Maine (the other two states with GOP senators from states that Clinton carried in 2016), Gardner’s voting record is skewed more heavily against him. Still, his voting record almost exclusively aligns with Trump’s, with his few disagreements mostly relating to a handful of foreign policy matters. In a state that voted against Trump by 4.9 percentage points in 2016 and where the president’s approval rating hovers in the mid-30s, it could spell trouble for Colorado’s first Republican senator since Wayne Allard.

► The White House physician who recently examined President Trump will discuss the President’s physical health with the media today.

► Here’s your daily update on the “Shithole” controversy. As Chris Cillizza writes for CNN, somebody is lying about whether President Trump referred to several foreign countries as “shitholes.” Conservative columnist Jennifer Rubin thinks it is pretty obvious that the liars are those who are claiming Trump didn’t say “shitholes.”

► Former Congressman Tom Tancredo is taking heat from opponents who say the Republican gubernatorial candidate wants to cut retirement benefits for teachers. In this same story, longtime Colorado pollster Floyd Ciruli predicts that Tancredo will be the GOP nominee for Governor in June.

► As the Colorado Independent reports, Republican lawmakers in Colorado are pushing to repeal a ban on high-capacity magazines in firearms despite a New Year’s Eve attack that killed a Douglas County sheriff’s deputy.

State Sen. Tim Neville (R-Jefferson County) had a strange rationalization for the repeal push: “No gun guy is going to use a 100-round magazine. They jam.” So, then, why do we even need to allow 100-round magazines?

► Major construction on the Aurora VA Hospital may be finished soon, but the overall project is far from being completed.

► Greg Lopez, a no-hope Republican candidate for Governor, is using his own history of domestic violence as a reason to support his campaign.

► The Huffington Post picks up on a story we brought up last week: Republicans are embracing (literally) Rep. Steve Lebsock, who is facing multiple sexual harassment accusations.