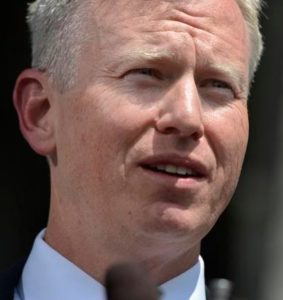 I have seen the future of Colorado, and it does not include me as Governor.

Republican George Brauchler has officially abandoned his bid for Governor in order to run for Attorney General. As the Colorado Springs Gazette reports this morning:

George Brauchler, the 18th Judicial District Attorney, has decided to drop his candidacy for the Republican nomination for Governor of Colorado for 2018. He first announced his decision to run last April.

Instead, Brauchler will campaign for Attorney General.

“My decision to run for office has always been about my commitment to serving Colorado far more than it has been about the title of the elected position,” said Brauchler in a statement released Monday. “That commitment remains just as strong as we make this important change.”

Brauchler is absolutely committed to getting elected to some sort of statewide office. It appears as though he won’t have to navigate through a crowded primary in a race for Attorney General — both Rep. Ken Buck (R-Greeley) and state Rep. Cole Wist are backing off — but Brauchler has a long way to go to catch up to Democrats like Phil Weiser and Michael Dougherty in the AG’s race.

Two years ago, Brauchler resisted a courtship from Republicans to be their default U.S. Senate candidate. After the 2016 election, Brauchler moved quickly to build support for a bid for Governor, officially launching his campaign in early April. But Brauchler’s gubernatorial bid never really took off; he had been limping along for months, and when he failed to even raise $100k in the Q3 fundraising period, the narrative of a campaign on life support began to take hold. Tom Tancredo’s subsequent entry into the race closed off whatever path to the GOP nomination Brauchler might have had left, and Attorney General Cynthia Coffman’s decision to run for Governor rather than re-election gave Brauchler the opening he needed to exit a race he couldn’t possibly win.

Attorney General is probably the statewide office that always made the most sense for Brauchler, but as he enters the race today, it is with the air of a man seeking a consolation prize.