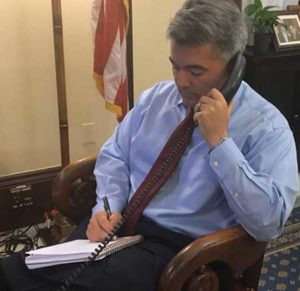 Colorado Republican Sen. Cory Gardner is the head of the National Republican Senatorial Committee (NRSC) for 2018, and it’s turning out to be a pretty crappy job. We’ve been documenting the extent to which Gardner’s role as NRSC Chair is becoming quite a headache for the first-term Senator, and on Sunday, Mark Matthews of the Denver Post dug into the subject with more detail:

The National Republican Senatorial Committee has seen a recent plunge in fundraising, driven by what many donors see as the party’s stymied agenda in Congress.

Potentially more troublesome is the civil war between party leaders and Republicans aligned with former White House adviser Steve Bannon. This rift has already drawn the committee into an Alabama primary election in which it first backed the unsuccessful establishment candidate and later the far-right insurgent — and eventual nominee — Roy Moore.

The shift in support risks attacks from both a vocal faction of Republicans as well as Democrats eager to tie the NRSC to candidates such as Moore, who once wrote that U.S. Rep. Keith Ellison, a Minnesota Democrat and Muslim, shouldn’t be allowed to serve in Congress because of his religion.

Taken together, Gardner should expect to walk a tightrope for the rest of his two-year term, said one political observer who described some Republicans as “in open revolt.”

Matthews notes that fundraising for the NRSC — a primary job for Gardner — is not going well compared to opponents at the Democratic Senatorial Campaign Committee (DSCC). The DSCC outraised the NRSC by a 2-to-1 margin in the last three months with Republican insurgents — led by former Trump adviser Steve Bannon — growing more emboldened in their rejection of the GOP establishment.

Matthews also asked Gardner about political difficulties in backing candidates such as Alabama Republican Roy Moore, who is crazy as shit. Gardner responded with a typical nonsense quote:

Gardner would not name examples but said he would “make it clear where I agree and disagree with anyone — and I have done that over the past many years — and I will continue to do that going forward.”

According to recent polling, Gardner is the 8th least popular U.S. Senator in the entire country.