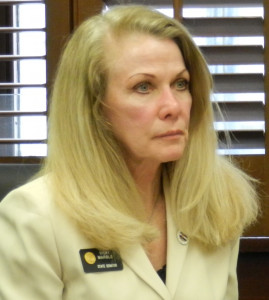 State Sen. Vicki Marble (R-Broomfield-ish) is no stranger when it comes to making what we could charitably call “controversial” statements, but she really lowered the bar for herself this week while speaking to a troop of Cub Scouts in Broomfield.

We’ll get to that Broomfield scout meeting in a moment, but first a little primer on Marble. It is Marble who came up with the “Hateful Eight” moniker to describe her and seven of her conservative colleagues in the state senate. She has alleged that renewable energy proponents “destroyed” the town of Craig with their “maypole” windmills. She has trouble differentiating between legitimate news sources and satire sites like “The Onion.” She believes that advocates for equal pay are actually victimizing women.

And, of course, Marble was the voice behind the infamous “Chickengate” affair, in which she explained during a legislative hearing on poverty that African-Americans have a shorter life span because they eat too much chicken and barbecue; the State Republican Party practically tripped over itself trying to distance itself from Marble’s commentary on this issue.

On Monday, Oct. 9, Marble spoke to a Cub Scout pack in Broomfield and delivered a breathtaking display of craziness. Videos of Marble’s remarks showed up on YouTube soon afterward; we’ve taken the liberty of transcribing Marble’s comments so that you can better hope to understand one of the more uncomfortable diatribes we’ve come across in recent memory.

You can read Marble’s comments on a variety of subjects after the jump. We’ve also included links to the videos related to the transcription… 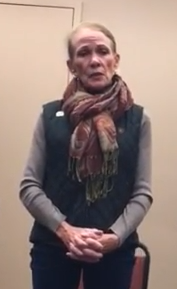 This video begins with a Cub Scout asking Marble about gun control issues. Marble then discusses the merits of arming gazelles with automatic rifles, or something…

“We need crime control. It has been shown that the more guns that a society has, the less crime or murders that are committed. Look at Chicago. Chicago is a gun-free zone. But they have more crime, and more murders, than anywhere else in the United States. Look at Detroit. Same thing…

…”When we look at the shooter, there is something that we call the predator. The shooters are a predator, and the prey are us. What they are banking on are unarmed people…

“I’ve had friends who have been violently attacked and raped, and I also know that they were in a gun-free zone…and left their gun in their car, and didn’t have it with them to protect them. They were lucky to escape with their lives. The next one didn’t survive. Had my friend had her gun, maybe the rape wouldn’t have happened, and maybe the other woman would still be alive.” [Pols emphasis]

It’s worth reminding you here that Marble is speaking to a troop of Cub Scouts.

“Those are very serious questions [on gun rights] that you ask, and they have very serious implications. I am a Republican, and also I am the number one conservative in the state. I do protect life through being armed.” [Pols emphasis]

We could easily write an entire post about each subject that Marble addressed with the Scouts on Monday. Some of this stuff is boilerplate GOP talking points, but Marble adds her own unique flair to make them sound even more ridiculous.

“Fossil fuels are the only thing that we have to give us this building. To give us this great landscape out there and all of the tractors and mowers that keep it well and good. And move those rocks – everything is run by fossil fuels.

“When we look at the coal industry – why was it demonized, that coal was so bad? We have different types of coal throughout the United States. Back East, there’s a lot more sulfur content than there is here in the Midwest. Especially Gillette, Wyoming – they bring that coal down to a place north of Fort Collins – a power plant.

“What was the more affordable, reliable, and abundant source of energy, for that plant and for any plant in the United States – it’s coal. Coal has given us the prosperity that we have at this time.

“You have to get a hazmat team to take that battery out of that electric car and dispose of it, because of the deadly chemicals in it.” [Pols emphasis]

“I drive a big vehicle, and my vehicle is more green and environmentally-friendly than a Prius because of that battery and the disposal of that battery, and the life of that car – seven years, that’s not a long time.”

Alright, now let’s take the crazy up a notch…

“I’m all for kids going out and having a good time and playing, and doing what they can as kids. But when they get old enough to work, and they’re working alongside their parents and their parents are teaching them, you know, a work ethic and what not. That’s great. But when you have forced labor of kids in mines, that’s not too good. So we can have an electric vehicle? Yeah, don’t count me in on that.”

This section begins with a question from a Cub Scout about Marble’s 2013 comments that African-Americans have higher mortality rates because of all of the chicken and barbecue that they eat. Marble insists that she didn’t say these things, which is silly, since THERE IS AUDIO OF MARBLE’S COMMENTS.

“I didn’t [say those things]. That was made up by the media. So you want to believe it? You believe it. But that’s not how it went down. I didn’t do that.” [Pols emphasis]

“We know why people die. Genetics. Sometimes people eat poorly, people don’t exercise. We have multicultural foods within the United States, and we’re all blessed to have it. We all love it, and we all eat it. And we just better figure out our genetics and if we aren’t eating properly.”

You can already tell that we are veering toward uncomfortable territory here, but then Marble really takes it up a notch:

“Because I have blacks in my family. I have blacks and Mexicans. They aren’t Latino – they’re Mexicans. I have Jews, and I have Native Americans, too. And we talk about our genetics and what we’re predisposed to so that we can protect each other. We eat everything, and we exercise, and we try to take care of each other.

“Even the Jews in my family – there are certain diseases that run in the Jewish community. We’re very aware of that too. So I have a very multicultural family and I’m proud of that.

And we have those lousy Irish (rolls eyes). [Pols emphasis]

We couldn’t possibly make this up.

Near the end of this segment, Marble answers a question about whether she believes any media outlets in Colorado are truthful. Her response: “No.”

The question that kicks off this section of video is difficult to make out. One of the Cub Scouts asks about race and why Americans elected a non-white President in Barack Obama.

“Why did they [vote for Obama]? I don’t know, you’ll have to ask them. That’s a good question – I often wonder that myself.

“There are many black people that I wish could be President.” [Pols emphasis]

Let’s just stop here for a moment so that you can catch your breath.

“People shouldn’t be looked at as a skin color. They’re all people.

“There are some people that you find in life that maybe you don’t like too well, and maybe you just kind of stay away from them. And then there are others that seem to really get along with you really good, and they have good character, and they don’t lie or cheat and steal. You think, oh my gosh, I’d love to have them as friends.

“Good friends come in all colors. I really am saddened by the fact that we had to have a color for a President, but I don’t know why they do that. [Pols emphasis]

“Because we’re all the same. Just like women. We should have more women in politics – well, the RIGHT women. And the right men. Just the right people that we should have. Not just to fill a quota. We get lost in that. We have to have so many of this, and so many of that…Well, anytime you do that you have reverse discrimination against another group. Just let everybody find their way and work and raise their kids and be happy – don’t worry about the color.

Vicki Marble on a Border Wall with Mexico [video link]

We’ll finish up the “Cub Scout Tapes” with some good old-fashioned xenophobia. The question that kicks off this section is about whether Marble agrees with President Trump’s desire to build a border wall with Mexico, and Marble wastes no time reminding the Troop that she once went down to the border with 11 other Colorado Republicans so that they could observe the problem firsthand.

“In some areas, I think it’s a good idea. I went down to McAllen, Texas with 11 other legislators. On our dime – taxpayers did not fund this trip. And we spent time with a lot of different levels of government.

“They have boats that patrol the river between Mexico and Texas. And on those boats, they are armed with .30 cal machine guns. It’s serious business.

“In McAllen, Texas, they had 60,000 people come across the border in 3 months. Most of them women and children. And the biggest worry and concern is that those kids have no birth certificate with them. None. And the person, a lot of times, wasn’t their parent. Were these kids kidnapped? They could have been. When they come over, nobody even knows they exist. Because there’s no documentation of their birth.”

This is a topic that Marble has visited before. Are kids that come across the border from Mexico actually kidnapping victims? We don’t know — but probably! Marvel below at how Marble gets into the details of this big conspiracy:

“So the person who was with those children, they have a number to call. The number is usually somewhere on the east coast. The person on the east coast then transfers money to McAllen, Texas. Those people then pick up the money and buy bus tickets to the address on that money order. And they go. Nobody hears from them again. Nobody knows if they live or die.” [Pols emphasis]

We know what happens next: They take the four-year-old kids and ship them off to Africa to work in the lithium mines.

“They come from South America on this train that they call “the beast.” And “the beast” comes along to Mexico, and it is filled and is overflowing with people. I’ve seen pictures of it, and it’s unbelievable that these people could actually travel on a train like that.

“The beast” is not a good thing. It carries on it a lot of people who have diseases that are far beyond what we have seen in this country.

“We can not keep them or detain them for more than 24 hours. Do you think 24 hours is enough time to look and see what 60,000 in people in a six month period of time, what their health is?

“It would be really good in some of these areas to have a wall. And in some of this areas, there are people, regular citizens, who do border patrol. And some of the legislators went with them to see how it worked, and it worked out pretty good. A lot of the Mexican immigrants that would come over across the border – if they would see these people on their four-wheelers patrolling, they would go back.” [Pols emphasis]

“From what I’ve seen, I’m certainly not against it. And for the health and well-being of this country, the wall would certainly be beneficial until we figure out who is really coming over.”