State Sen. Vicki Marble isn’t happy that the Denver Post noticed she and seven of her colleagues were a consistent thorn in the side of, well, everybody in the 2015 legislative session.

Take a look at this screenshot of the opening paragraphs of Marble’s Op-Ed for the Colorado Statesman. According to Marble, she belongs to an informal group dubbed the “Hateful Eight” (which also includes Senators Tim Neville, Jerry Sonnenberg, Randy Baumgardner, Chris Holbert, Kevin Lundberg, Laura Woods, and Kent Lambert).

Just so we’re clear: Colorado Pols did not come up with this “Hateful Eight” designation. This is all Vicki Marble — which is why the headline has “Hateful, Dissident Eight” in quotations. Enjoy! 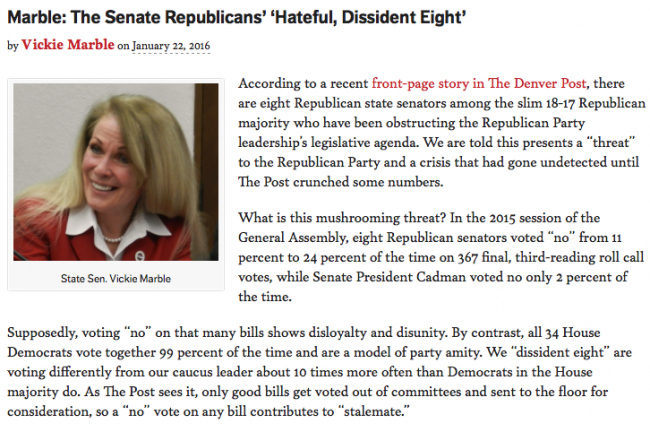