Politico’s Dan Diamond reports on the latest Congressional Budget Office estimate of Republican legislation to repeal the Affordable Care Act–this being an estimate of the version known as a “skinny repeal,” which would eliminate specific components of the ACA like the individual and employer mandates while leaving other parts of the law intact.

The CBO estimates millions of Americans would still lose coverage–and premiums would skyrocket:

Democrats asked the CBO to score a mock-up of the bill based on provisions that the GOP is reportedly considering, two Democratic aides said. The mock-up included repealing Obamacare’s individual and employer mandates, medical device tax, community health center funding and prevention fund, in addition to defunding Planned Parenthood.

Based on those provisions, the CBO projected that the so-called skinny repeal bill would result in premiums about 20 percent higher compared to current law, according to a Democratic aide. [Pols emphasis]

In theory, this estimate that “skinny repeal” would hike premiums by some 20% should be the plan’s death knell. We’re basing that on the explicit statement from Sen. Cory Gardner that he would not support legislation that increased the cost of insurance: 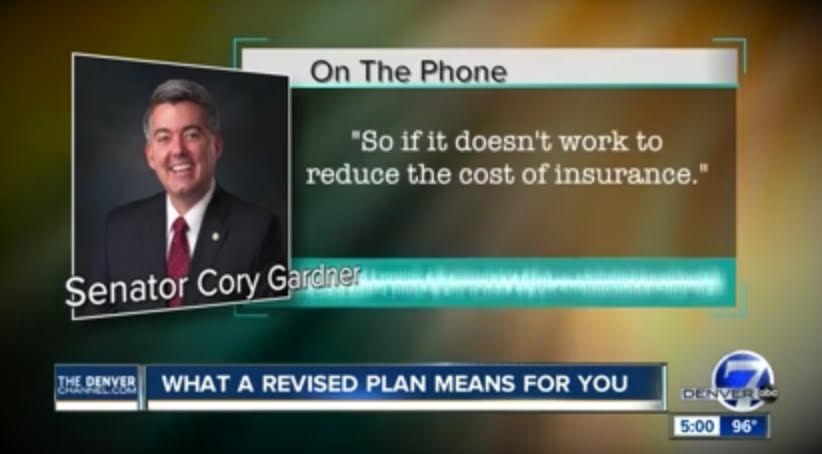 Of course, this is the same Cory Gardner who paid lip service to protecting Medicaid expansion patients and having the details of a replacement before voting for repeal. And in the last 48 hours, Gardner has broken both of those promises. By voting for bills that would reduce the number of insured in Colorado by hundreds of thousands, Gardner has made a joke of his former concern over policy “cancellations.” By voting to kill the Medicaid expansion and changing his rhetoric to “making Medicaid sustainable,” Gardner has broken his promise to protect those patients. And by voting for repeal with no replacement, he’s broken that most basic of promises as well.

After all these broken promises, would deliberately voting to jack up premiums–for no good reason other than tax relief for wealthy Americans–be the straw that broke the proverbial camel’s back? Or has Gardner already crossed that threshold as his plummeting approval ratings indicate?

We can’t believe anything Gardner says, demonstrably. All we can do is wait for the votes.