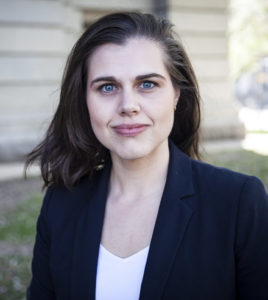 Democrats have at least four candidates vying for Attorney General, and another four hoping to be the Party’s nominee for Congress in CD-6. Republicans have four or five candidates for State Treasurer now that Polly Lawrence has made her intentions known. Everybody and their mother is running for Governor.

Until today, the one high-profile race in 2018 that had yet to attract more than one candidate was for Secretary of State, where incumbent Republican Wayne Williams had been sailing along all by himself. Democrats now have a challenger for Williams, as the Denver Post reports:

A Democratic candidate for the state’s top elections job is calling Donald Trump’s voter fraud panel “a sham commission” and blasting Secretary of State Wayne Williams for his “rash decision” to comply.

“We need to call the commission what it is and be very careful about how we are dealing with the commission,” said Jena Griswold, a former voting rights attorney for the Obama campaign and member of Gov. John Hickenlooper’s administration.

Griswold, a 32-year-old from Louisville, filed paperwork Wednesday to challenge the Republican incumbent in the 2018 election.

And who, you may ask, is Jena Griswold? Let’s go back to the Post story for the answer:

Now she works as outside counsel to a company she wouldn’t name [Pols emphasis] and works on public policy issues as part of her firm, Griswold Strategies.

There are a lot of tough questions in politics. “Who do you work for?” is not one of them.