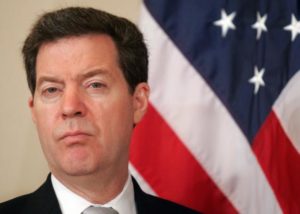 For the last few years under ultra-conservative Gov. Sam Brownback, our neighbors in Kansas have been part of an experiment to see what happens if you do what conservative lawmakers from coast to coast say they want: cut taxes, cut them a lot, and then keep cutting in hope that if you cut taxes enough eventually more money will flow into state coffers to pay for the stuff that matters.

As the Los Angeles Times reports, it didn’t work:

The grand economic experiment on the prairie has ended.

It was a Waterloo moment for the conservative second-term governor, who refused to back down from the tea-party-inspired plan he signed in 2012 to promote business growth in the state.

After the Legislature passed a bill Tuesday morning, just after midnight, to roll back most of Brownback’s tax agenda, the governor exercised his veto power to kill it. But a coalition of Republicans and Democrats united Tuesday night to override the veto with a two-third’s majority in both chambers.

You see, rather than fulfilling the long-held conservative axiom that cutting taxes increases overall tax revenue by stimulating economic growth, in Kansas the Brownback tax cuts plunged the state into a fully avoidable fiscal crisis. Instead of growing revenues, the state faced an almost $900 million deficit for the coming fiscal year–a hard reality that forced Republican lawmakers to take action counter to their ideological convictions.

But Gov. Brownback, more or less by himself, refuses to concede he was in the wrong:

“The state has taken a big step backwards,” Brownback said. “I think it’s the wrong philosophy. I just think this is the wrong way for us to go.”

…Brownback said a lot of people mistakenly made the override votes on tax policy about the governor himself.

In the end, Kansas decided it wants to be a functional state. It seems to us there is no more important foundation for growth. The “experiment” of Kansas slashing taxes for the sake of slashing taxes is now a cautionary tale, showing again how the excesses of theoretical ideology can prove destructive in the real world.