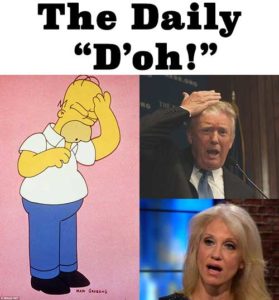 There is so much breaking news lately on the ever-widening allegations about Russian ties to the Trump campaign that it can be difficult to keep track of everything. With that in mind, we’ve created what we’re calling “The Daily D’oh!” to help you stay up-to-date on President Trump and the rest of the White House staff as more news emerges about Russia, James Comey, Robert Mueller, special investigations and everything else related to this ongoing crisis.

So, let’s jump right into the swamp with the latest news this afternoon…

Deputy Attorney General Rod J. Rosenstein told the full Senate he knew that former Director James B. Comey would be fired before he wrote his controversial memo that the White House initially used as justification for President Trump firing the FBI director.

♦D’OH!♦
Reuters is reporting today that the Trump campaign had at least 18 undisclosed contacts with Russian officials:

Michael Flynn and other advisers to Donald Trump’s campaign were in contact with Russian officials and others with Kremlin ties in at least 18 calls and emails during the last seven months of the 2016 presidential race, current and former U.S. officials familiar with the exchanges told Reuters.

The previously undisclosed interactions form part of the record now being reviewed by FBI and congressional investigators probing Russian interference in the U.S. presidential election and contacts between Trump’s campaign and Russia.

♦D’OH!♦
As the New York Times reports, the Trump transition team already knew that Michael Flynn was under investigation before he came to the White House…but hired him anyway to become National Security Adviser.

♦D’OH!♦
South Carolina Republican Sen. Lindsey Graham believes the stakes have been raised in this investigation. From CNN:

The South Carolina Republican said he wasn’t able to ask specifically if it was now a criminal probe “but the takeaway have is everything he said was that you need to treat this investigation as if it may a criminal investigation”.

Rosenstein briefed the US Senate just one day after he turned the political world on its head by appointing a special counsel to investigate possible collusion between the campaign of President Donald Trump and Russian officials meddling in last year’s election.

♦D’OH!♦
Anybody seen Vice President Mike Pence lately? CNN ponders the idea that Pence has all but disappeared over the last 48 hours.