Tony Sanchez is like the Winter Olympics of Colorado politics: He re-appears every four years to a lukewarm reception, and most everything he does is fairly confusing. This snapshot from Sanchez’s Twitter feed tells you everything you need to know about his return to Colorado politics: 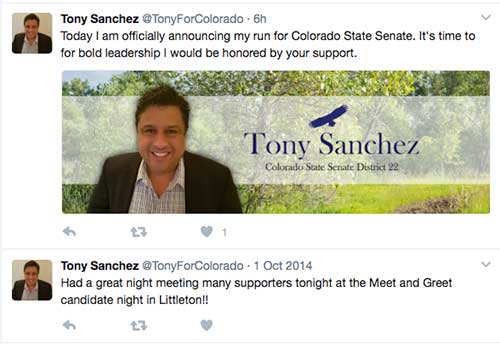 Colorado political observers will recall that Sanchez emerged out of nowhere (also called “California”) when he announced in 2014 that he would seek the Republican nomination for State Senate in SD-22 (Lakewood). Sanchez was a recent arrival in Colorado, but he somehow convinced conservative groups such as Rocky Mountain Gun Owners (RMGO) to back him in a GOP Primary against the more moderate and better-known Mario Nicolais.

Sanchez pulled off a surprise victory over Nicolais in a bitter primary fight that caused much consternation among Republicans; Democratic incumbent Andy Kerr went on to defeat Sanchez in the General Election for a seat that Republicans thought they had a decent chance of winning. Kerr was a probably a better candidate than either Nicolais or Sanchez, but the general opinion at the time was that Republicans might have had a shot at capturing SD-22 with a less-extreme candidate who actually had some sort of personal history in the area.

Kerr will exhaust his term limits in the state Senate in 2018 (he’s running for Congress in CD-7), and Sanchez is back to take another shot at the legislature. It is not clear yet who will be the Democratic candidate for SD-22, but the presence of Sanchez won’t exactly be a deterrent for anyone considering the possibility.