TUESDAY UPDATE: Sen. Cory Gardner’s tele-town hall yesterday featured as much excitement as was possible with the ability to mute whatever he didn’t like:

In the video clip above, you can see several of Gardner’s extremely evasive answers to questions about investigating President Donald Trump, Trump’s tax returns, and excessive costs of the President’s travel. In the first clip, Gardner gives a long, rambling response about not having “the facts” to be able to speak about it. In the second, Gardner bizarrely says that everyone in politics should have “the opportunity” to release their taxes–as if they didn’t? In the third, Gardner dodges the question of the frequency and expense of President Trump’s travel by saying all Presidents should have security.

There has been very little reporting about the contents of Gardner’s conference call yesterday, but we expect that any reporter who does dive into what was actually said will find plenty of story to tell here. Once again, Gardner’s fabled coolness under fire doesn’t look so cool on live video–even without the heckling he avoids by not holding face-to-face meeting with his constituents.

An announcement went out last weekend from Sen. Cory Gardner’s office about a tele-town hall meeting he’s holding this evening at 5:45PM: 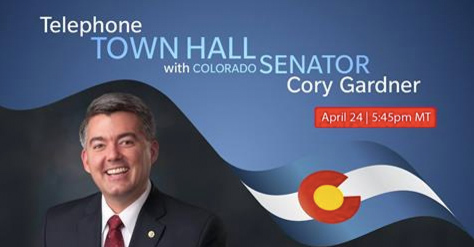 It doesn’t appear that there was much notice for this event–Gardner’s office has kept a list of prospective tele-town hall participants from the signups to previous events, but the first announcement from Gardner’s office about today’s call seems to have been Saturday afternoon. Needless to say, that doesn’t leave busy constituents with much time to schedule.

Tele-town halls have been Sen. Gardner’s sole means of outreach to ordinary constituents since President Donald Trump took office in January. As of this writing, Gardner is the only member of Colorado’s delegation in either party who has not yet held a face-to-face event with anyone other than invitation-only and/or corporate audiences.

The reason is simple: live audiences don’t have mute buttons.

In response to this latest announcement, the Facebook responses to Gardner have been…well, rather uncharitable: 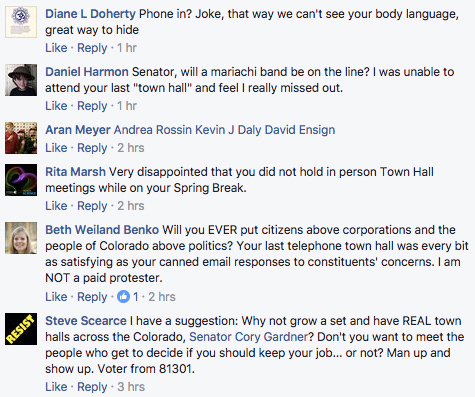 As of now there are almost 440 such replies to this event posting on Facebook–many featuring language that’s not fit for a family show. Safe to say, Gardner’s half-hearted attempts at “constituent outreach” are not having the desired effect. After Rep. Mike Coffman faced a harsh grilling from his constituents but still managed to say something nice about the experience, Gardner’s refusal to show constituents the same respect stands out even more.

At this point, we don’t get it. Fake accountability like this is much more politically-damaging for Gardner than if he would just simply take his proverbial medicine. That Gardner still can’t see the cost/benefit in doing so may be evidence that he’s just not the political mastermind he’s chalked up to be in many circles.

Maybe Gardner really is a coward.