UPDATE (Sunday evening): Via Twitter, the campaign staff for Rep. Mike Coffman (R-Aurora) feed the fervor with exactly the wrong response. First, Coffman and staff said “activists” were just trying to “make a show” out of trying to talk to Coffman during his publicly-announced open office hours. Then they went here:

(2/3) But the great majority of Americans want the Obamacare mess cleaned up. #copolitics

The problem with this response is that it isn’t true — not even a little bit. A bevy of recent polls have shown the same thing over and over: Americans most definitely DO NOT want to see Obamacare gutted. From The Hill:

Only 18 percent of voters think Congress and President-elect Donald Trump should fully repeal ObamaCare, a new poll released Thursday finds. Another 47 percent said only some of ObamaCare should be repealed, while 31 percent said it should be left untouched.

As Rasmussen Reports noted last week, public opinion about repealing Obamacare is rapidly moving in the opposite direction of Congressional Republicans:

Just 30% now think Congress and the president should repeal the entire health care law and start over again, down from November’s high of 40% and matching the lowest finding in tracking since July 2014. Fifty-six percent (56%) say Congress and the president instead should go through the law piece by piece and improve it, the highest finding to date. [Pols emphasis] (To see survey question wording, click here.)

These results are consistent no matter how Republicans try to frame the question. As Tennessee Republican Rep. Marsha Blackburn learned firsthand earlier this month (via CBS News): 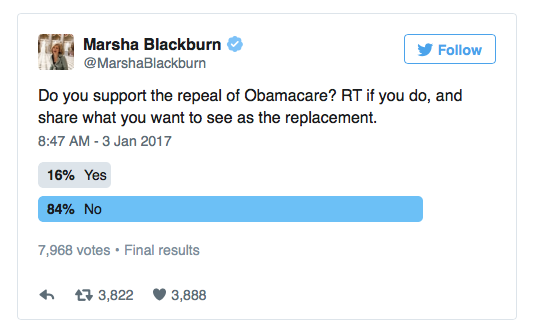 Poll after poll after poll show the same thing: A majority of Americans DO NOT support what Congressional Republicans are trying to do with Obamacare. The American public increasingly understands that the GOP has no plan for replacing Obamacare, and people aren’t holding their tongues anymore. This isn’t a “political stunt.” This is the new reality.

While more than 100 people were waiting to meet with him, Mike Coffman sneaks out early from his own community event. #9News pic.twitter.com/NAZlXTKgQm

Safe to say, not the finest hour for statesmanship. 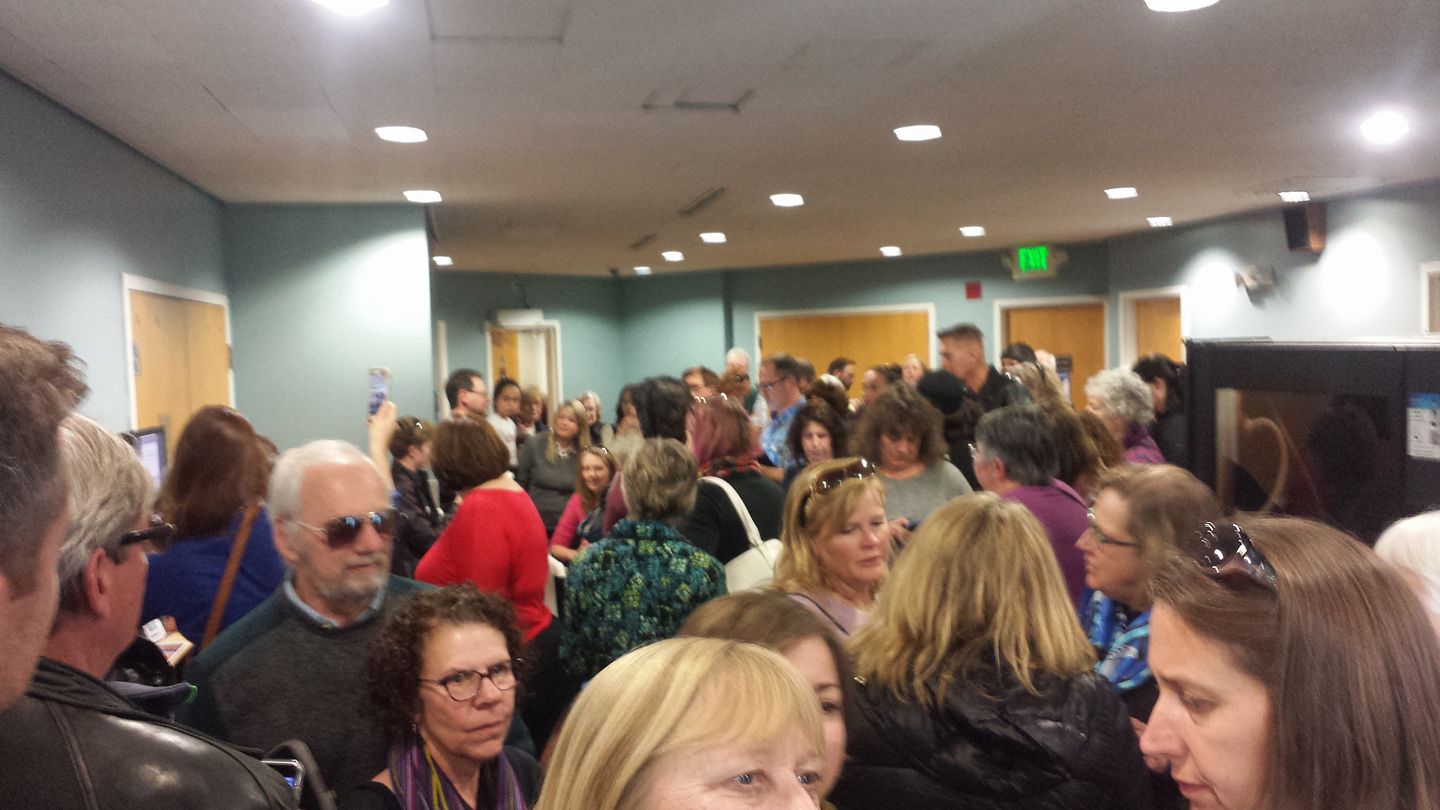 “Sorry, that’s all the time we have.”

9NEWS reports on a “meet your congressman” event hosted by Rep. Mike Coffman yesterday that did not go the way he and his staff expected: with hundreds of constituents showing up hoping for answers on what Republicans under President-elect Donald Trump are plotting on a host of issues.

Kronda Seibert just wanted Coffman to hear her concerns. But, she ended up trying to organize the crowd that gathered outside the large community room.

“The Representative didn’t have a plan. They expected just a small handful of people to show up,” Seibert said. “We were under the understanding it was a town hall meeting and they were only allowing four people in at a time.”

Coffman’s chief of staff, Ben Stein, sent a statement addressing what happened Saturday afternoon. The statement says the Congressman’s community event was not a town hall…

Joined an unbelievable crowd of about 200 people today who wanted to see their Congressman, Mike Coffman, at a public library in Aurora. He planned it so only a few people could individually meet him at a time, so many people were turned away. It seems to me he learned that turnabout was about to be fair play after how the Tea Partier right wing fanatics lied and rallied and disrupted Democratic town halls in 2009. This crowd was passionate and respectful though, and we sang America the Beautiful, and I got us going on We Shall Overcome… [Pols emphasis]

All of this was apparently too much for Coffman, who quietly exited the event before its scheduled conclusion:

While the crowd was waiting inside the lobby, singing and chanting, Aurora Police officers are putting up crime scene tape to create a perimeter outside of the library. This allowed Coffman to leave secretly at about 3:24 p.m. unbeknownst to those still waiting to see him. The community event was scheduled from 2:00 p.m. to 3:30 p.m.

This practice of only meeting with small groups of constituents instead of holding an open forum more like a traditional town hall is not new for Coffman, who has been very conscious of being confronted by displeased constituents ever since his district was redrawn to be a diverse battleground in 2011. It serves him well for avoiding negative press–except when his constituents are angry enough about something to show up in large numbers, in which case the strategy breaks down.

That appears to be what happened yesterday.

The past week has seen an uptick in protest actions targeting Republicans over the impending repeal of the Affordable Care Act, along with other concerns mounting as the GOP takes total control over the federal government next Friday. In all cases–last week’s large protests outside Sen. Cory Gardner’s Denver and Greeley offices, and now this overflow crowd at Rep. Coffman’s carefully managed “outreach” event–the response from the public has exceeded organizers’ expectations. That’s a very good sign for the much bigger demonstrations planned for next Saturday in Denver and cities around the nation, the day after Trump takes office.

With that said, we’re a little reticent to use the 2009 “Tea Party” protest movement as a yardstick to measure what’s happening now. There’s no nice way to say this, but the underlying motivators of the Tea Party were…well, they did not have what well-adjusted people would call a factual basis. There’s an argument that protests driven by ignorance and unfounded hyperbolics–with an ugly foundation of racism lurking just beneath the surface–can’t really be used to measure other protest campaigns without cheapening them.

But there’s one thing about the Tea Party protests in 2009 that is certainly relevant to this debate, and will become more relevant going forward if this outbreak of protest proves more than inauguration season fashion. And that’s what they led to in the 2010 elections.

“It’ll soon shake your windows and rattle your walls, for the times they are a-changing.”