The Denver Post’s Michael Riley reports only part of the story today:

Now that Congress has missed the chance to pass health care reform before the summer recess, the reform battle could be won or lost not in Washington’s hallowed halls but in lawmakers’ home districts during August.

Don’t expect a gentleman’s war or the Geneva convention. This will be the political version of trench warfare: brutal, mud-filled and bloody.

Already, YouTube is filling up with videos of Democratic lawmakers across the country confronted at town-hall meetings by opponents of the current plans for health care reform. (A Maryland lawmaker was hanged in effigy; Texas Rep. Lloyd Doggett faced protesters carrying a tombstone with his name on it.)

“We’re headed right now to this thing being a fringe group of people demanding that there be some kind of ‘public option’ versus real America that is saying we’re not going throw out a health care system that delivers fine care but is expensive and maybe has to be refined,” said Jeff Crank, head of the Colorado chapter of Americans for Prosperity, which is launching a 13-city Colorado bus tour today as part of its opposition to Democrats’ reform plans.

Groups like Crank’s and others also hope to turn the Democrats’ town-hall strategy on its head, flooding the events with opponents. Focus on the Family Action has been sending e-mail alerts to subscribers that encourage them to attend town-hall meetings and demand that abortion funding be explicitly excluded from any reform bill, according to Ashley Horne, federal policy analyst for the Colorado Springs-based group.

As the battle lines are drawn, Colorado congressional offices are being inundated with calls asking when members are holding events and where.

In a sidebar, Riley lists a few Democratic arguments in favor of their health care reform plans, and a couple of rather sanitary Republican counterarguments. Fair enough.

But there’s a big hole in Riley’s report today, a missing part of this story that we think explains the angry intensity behind these ‘townhall crashers’ as they disrupt Democratic recess events around the country–including a likely attempt to do so today at a downtown Denver clinic for the homeless, an event headlined by Speaker of the House Nancy Pelosi. 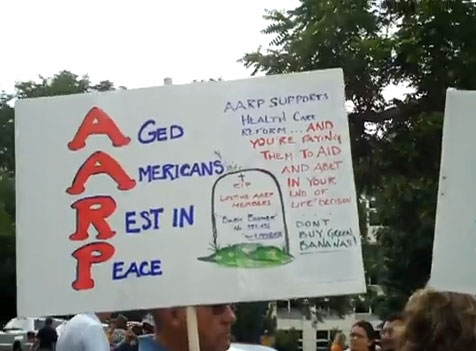 We’ve been watching the coverage of these protests build for the last few days, and a major disconnect has emerged in our opinion between media coverage of the protesters and the facts. What you see on television is generally upset protesters as background footage, a few audio clips of them yelling but mostly the protesters rolling in the background while talking heads explain “what it all means.”

The relatively dispassionate GOP talking points against the health care reform bill cited by Riley are what the talking heads are usually talking about on TV while protester footage runs in the background, cleverly leading the viewer to believe that those talking points are what the protesters are up in arms about. But they’re not.

There are two different narratives about the health care reform bill being pushed by reform opponents now–one publicly and the other virally though email networks, talk radio, word-of-mouth, etc. The public narrative is the one about tax hikes, deficit spending, and “burdens on business.”

The viral message is that Obama wants to kill old people.

CALLER:  Oh, great to… (cell drops).  I’m so angry.  I mean, I’ve been upset before about this but now I’m just so angry about this commercial.  They are just treating us as just mindless people working for insurance company, lobbyists.  I mean, we are citizens expressing our rights.  Are we just supposed to sit idly by while they try to get our parents to die — [Pols emphasis]

CALLER:  — because they know what to do, know what’s good for us?

RUSH:  You are supposed to get mad, exactly what you’re doing.

Look, you know it’s crazy. The television news producers who are, consciously or unconsciously, feeding this insanity by–we don’t know any other way to say it–concealing the actual opinions being expressed at these protests to create false empathy with them among non-crazy people, they know this rhetoric has no basis in reality. When these furious people scream at Democrats to “keep the government’s hands off my Medicare,” or “my insurance company doesn’t ration me,” some part of even the most cynical opponent of the plan has to realize they are manipulating ignorance for political advantage–and it’s wrong.

And yet it goes on, totally unchecked in the media. The key failure, in our view, is not telling the full story about what these people are actually saying in the crowds Jeff Crank uses as his backdrop–as much as we respect him, Michael Riley had a chance to do that today, and didn’t.