No word yet about recreational marijuana–but if the debate is about whether to prosecute medical marijuana patients, that’s not a good sign. 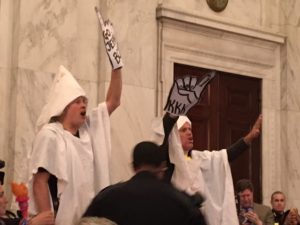 Fake KKK protesters before being escorted out of today’s hearing.

CNN reports from today’s contentious hearing before the U.S. Senate Judiciary Committee, as fellow Sen. Jeff Sessions of Alabama faces hard questions from his Democratic colleagues and softballs from Republicans–not that anyone expected differently, of course:

Sen. Jeff Sessions confronted one of the biggest criticisms surrounding his nomination to become the next attorney general, insisting he’s not a racist.

Testifying before the Senate Judiciary Committee Tuesday, Sessions diverged from his prepared remarks to address “head on” the very allegations that helped sink his nomination for a judgeship in 1986.

“I abhor the Klan and its hateful ideology,” Sessions said…

“I believe it violated the Constitution,” Sessions said in response to a question from Democratic Sen. Dianne Feinstein about whether he stands by his past statements calling Roe a “colossal” mistake.

The hearings to confirm Sessions are expected to be some of the most controversial, with Democrats hoping to break Sessions’ composure and expose what they insist are disqualifying political views. It’s going to take something fairly dramatic to move the rock-solid Senate GOP majority away from confirming their longtime colleague, but these hearings are the only real chance to get it.

We’ll update, for example if Sessions gives any clue what he plans to do about Colorado’s weed.