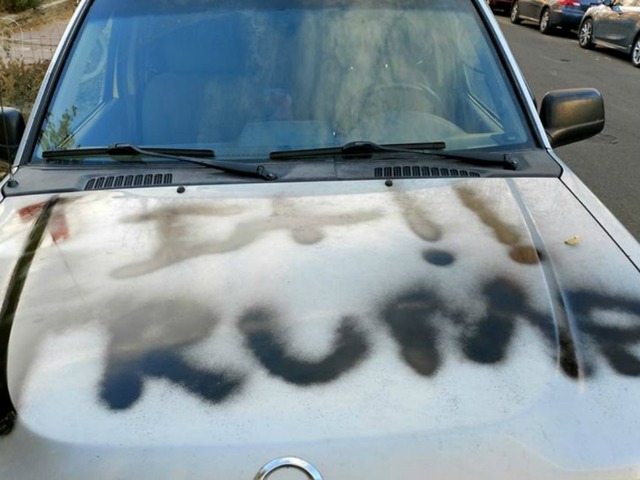 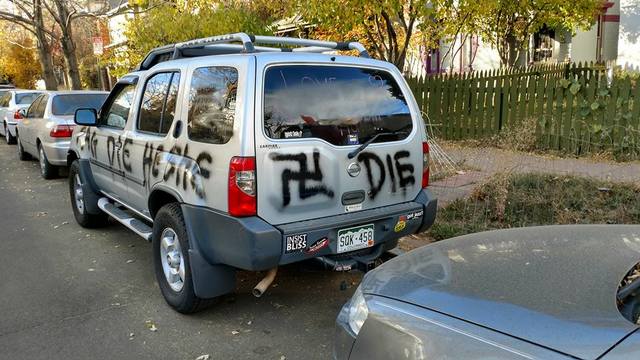 A sad story with a happy ending today from Denver7’s Blair Miller:

A transgender woman says she woke up to find her car vandalized with hate speech, a swastika and a pro-Donald Trump message in Denver’s Capitol Hill Wednesday morning, and police are now investigating…

Among the messages painted on her car were: “fag,” “die he she”, “tranny,” and “Trump.” A swastika was painted on the back tailgate.

A message saying, “Not my president,” appears to have been written on her car prior to the vandalism.

Amber Timmons’ story is unfortunately consistent with incidents that have been reported across the nation of vandalism attacks and acts of violence in the name of President-elect Donald Trump. The Summit Daily News reports on another such incident that occurred in Breckenridge:

After the election, on the morning of Nov. 12, a Breckenridge man reported to Summit County Sheriff’s deputies that his house had been targeted with profane, pro-Trump chalk graffiti and phallic symbols.

The man did not have any political signage in his yard and did not know why only his house appeared to be targeted, although he noted that he was concerned “about the current political climate” because he had two African-American children living at his home.

As of this writing, Ms. Timmons’ original Facebook post has been overrun by internet trolls accusing her of faking the incident. But Timmons’ neighbors responded to the crime with a heartening show of support–Denver7:

Timmons wrote on the post that police were called and showed up to investigate. She added that she went back inside her home, and walked back out to find encouraging sticky notes reading, “You are loved,” and “I am deeply sorry…love and peace wins always!” [Pols emphasis]

…By 11 a.m., Timmons posted that a police report had been taken and that her friends had come over and were cleaning the paint off – apparently with quite good success, according to pictures she posted. 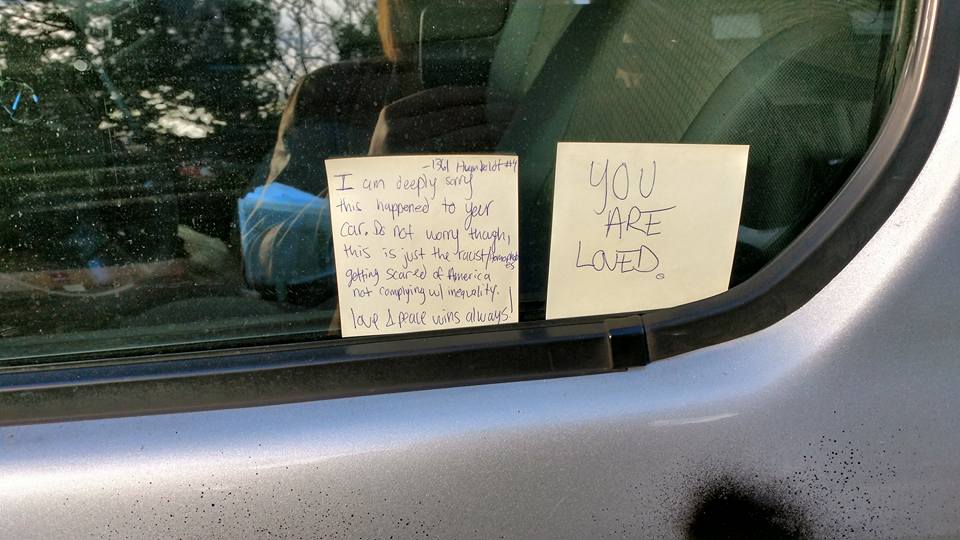 And that, dear reader, is more like the Colorado we know. Let the love be the story, not the hate.